"Dream" People - Inspirations For The Characters In The Hambledown Dream (Part 2).

Of all the characters that I created for my novel The Hambledown Dream, the one I had the earliest bead on was the character of Bruce DeVries, Andy's father.

When I first began entertaining the thought of writing this particular story, I had a clear idea that there was to be a father/son dynamic - a strained relationship where the father has little understanding of the son and vice versa. And again the visual part of my imagination kicked in and I saw clearly who it was that could best (physically) represent Bruce DeVries.

One of my most favorite films of all time has to be the 1981 Walter Hill film "Southern Comfort". Set in the Louisianna Everglades, Southern Comfort tells the story of a platoon of National Guardsmen out on a weekend recon exercise in the swampy marshes of "Cajun Country". Through the actions of these brash "cut-lunch commandoes" they unwittingly agitate an unseen band of cajun poachers. One of the Guardsmen is shot and killed which sets off a chain of events that sees these part time soldiers fighting for their lives as they are picked off one by one.


Starring Keith Carradine, Peter Coyote, Fred Ward, TK Carter, Brion James (a perennial favorite of mine), Southern Comfort is regarded as a classic, though perhaps not as much of a classic as others of it's era and or genre. 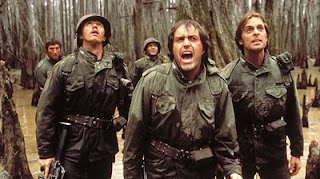 (Powers Boothe, center, as Cpl Charles Hardin in Southern Comfort, 1981).
Cast as the new-comer to the platoon of Guardsmen, Boothe plays Hardin - a quietly spoken but intensely 'present' man - who sort of becomes the reluctant leader of the platoon when everything goes to hell. He starts out in the film as a loner, hesitant about his presence in the platoon and thus he doesn't endear himself to the group initially. However, Hardin strikes up a tentative friendship with Spencer (Carradine) and this relationship becomes key to both men's survival as they struggle to escape the swamps and the poachers.
It was this quiet intensity that drew me to crafting the character of Andy's father in the story and, of all the characters in The Hambledown Dream, Bruce DeVries story arc remained pretty much unchanged from the time that I conceived him. Powers Boothe has been a mainstay character actor in film and television since the early 70's and though he has played a diversity of roles, this singular characteristic of quiet intensity has flowed through them all. 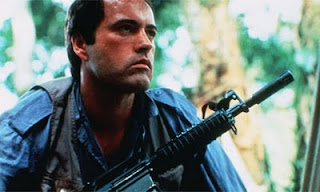 (Powers Boothe as Markham in The Emerald Forest, 1985).

Bruce is a distant figure when we first meet him in The Hambledown Dream. A long distance trucker for many years, Bruce and Andy are alienated from one another, they rarely talk to one another and given the destructive trajectory that Andy is on at the beginning of the story, it is not surprising that Bruce and Andy don't get along. However there is a hidden tragedy in Bruce's past that is only revealed when Andy comes to a critical junction in his own life. All is not what it seems.

Bruce DeVries is quiet but his presence is powerful and whenever Andy is in his father's presence, he feels inadequate. Andy has spent much of his life seeking his father's approval but he is constantly falling short. This only adds to the inner turmoil Andy experiences as the events of The Hambledown Dream unfold.

Posted by DeanfromAustralia at 3:55 AM