Alice Fraser Presents You Her Empire.

The Adelaide Fringe Festival has returned to my City for 2017 and it's a great time to be around such vibrancy and good nature which this renowned festival instills in the community. Of the many Adelaide Fringe shows I've been looking forward to this year, the chance to see Alice Fraser on stage again, was at the top of my list.

I wrote about Alice last year, having caught her 2016 show "The Resistance" and become a regular listener of her podcast "Tea With Alice". Alice is at once an engaging personality who thinks deeply across a wide range of subjects and she quick witted - both in conversation and in the art of constructing a narrative replete with guerrilla comedic observations. As a performer therefore, Alice Fraser ticks all the boxes that one should tick in deciding who to see. 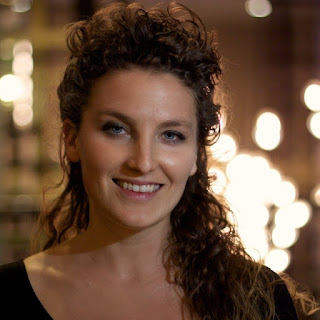 So, fresh from her run with the critically acclaimed "The Resistance" which she toured extensively throughout 2016, Alice Fraser has returned to this year's Fringe with her new one woman show "Empire".

Described as a reliably silly, unpredictably meaningful, narratively unorthodox, artful comedy show, Alice takes the stage with a more theatrical presence this time around. She proceeds to take her audience on a hour long journey through a frenetic and eclectic thought landscape where notions of traditional comedy are challenged by whimsical story telling, biting satire and heart warming, life affirming observations.

The subject matter Alice has chosen for "Empire" offers equal measure of comedy but, as she did with The Resistance, Alice has infused her narrative with moments of poignant insight that stop you short. They invite you to see facets of humanity in a way that you may not have considered before.

Audiences are sometimes brought into the fold to participate in a way that involves everyone in her performance. While it is at once hilarious to witness, Alice's way lends an intimacy that uplifts and that is rare for performance story telling of this kind.

As I left the venue, I witnessed the smiles of the audience and the babble of their conversation as they dissected the show and the meanings in it and I'm sure that those conversations went on long afterwards. It takes a considerable talent to achieve something so thought provoking.

Alice Fraser will be performing "Empire" at The Producer's Hotel throughout the Fringe until March 12th before taking it on the road to Melbourne, then Sydney, then Europe thereafter.

Book your tickets for Alice Fraser's "Empire" in Adelaide here.

Book your tickets for "Empire" in Melbourne here.

Book your tickets for "Empire" in Sydney here.

DFA.
Posted by DeanfromAustralia at 4:10 AM No comments:

Pop culture fandom is an interesting beast. The public discourse, examining the minutiae of today's pop culture franchises is, at once, something wonderful and engaging. At the same time it can be overwhelming and potentially fraught. There are a lot of competing interests in this most particular of realms. Competition for attention, competition for ideas and competition for a kind of supremacy of influence over the fandom of a franchise.

In the past week, I have observed a disturbing discourse in an area of Star Wars fandom that illustrates a gross misunderstanding of the love of the franchise.

It all begins with a bumper sticker. 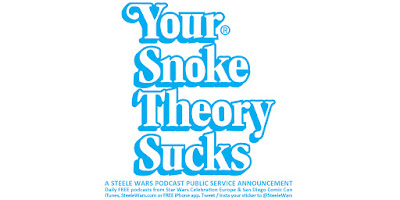 When Star Wars: Episode 7 - The Force Awakens burst onto cinema screens in December 2015, heralding the return of the much loved franchise, Star Wars fans were elated with the cinematic triumph. In the three years since it was announced by Lucasfilm that Star Wars would be returning to the screen, fan communities - already energized with anticipation and reveling in the pre-release fervor that traditionally accompanies a Star Wars film - responded to the return of Star Wars with an outpouring of gratitude and renewed vigor that fed into their various communities. Once again, Star Wars had become a part of the pop culture consciousness.

In the aftermath of the release, conversations, fan theories, debates and discussions took place that actually made social media something worth engaging with again. The discourse was (and is) lively, it attracted new fans to the franchise and it opened up opportunities for people to connect with like minds and enhance their love for Star Wars.

Sure - at times, the conversations and fan theories, have taken on a life of their own - a life as big and as bold as the franchise itself. People, understandably, get excited and they want to express their point of view. That's okay. It's a part of being a pop culture fan. Except when the discussion becomes fractious.

The viral meme "Your Snoke Theory Sucks", the brain child of Melbourne comedian Steele Saunders was born out of the fervent discussion around who the chief antagonist in the new Star Wars trilogy might be. 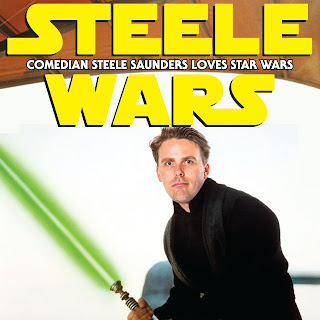 Designed as an affectionate "dig" at the sometimes over-blown discourse over a character that is designed to be intentionally ambiguous, "Your Snoke Theory Sucks" encourages fandom to have a laugh at itself and, perhaps, to take a little hot air out of the Snoke debate. It has become a viral meme, a bumper sticker, a T-Shirt and a key to one of the most welcoming communities of fandom I've ever been in.

Let me explain this.

Australians are known for their sense of humor. It is laconic, insightful and it is generally built on a healthy foundation of affection. We often express our love for something with a kind of back handed compliment - with a wink and a smile whereby we trust in the intelligence of others to interpret our real intent and acknowledge it with a cheeky tap on the nose that says "I see what you did there."

"Your Snoke Theory Sucks" is a perfect example of this kind of laconic humor. It is not malicious nor intended to be a serious put down of anyone. In fact, it has contributed to the discussion of fan theories around Supreme Leader Snoke. And it has found favor across Star Wars fandom - even crossing over into the Star Wars production community itself with notable figures such as Episode 8 director Rian Johnson and Ahsoka Tano voice artist Ashleigh Eckstein getting in on the fun. 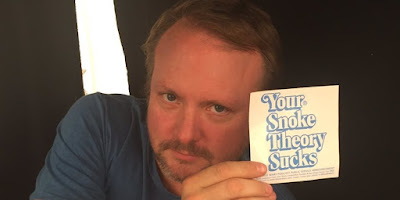 But some in the Star Wars fan community have taken exception to the meme, misunderstanding its intent and they have attacked the creator with accusations of bullying and gate keeping. They have failed to see the affection with which "Your Snoke Theory Sucks" has been delivered and they have refused to engage in a discussion about the intent of the meme. Instead, they have pursued an argument that aims to divide and alienate.

Steele Saunders is one of the most engaging and welcoming Star Wars fans I've had the pleasure to meet and interact with. Through his podcast "Steele Wars" and his associated social media presence, Steele has fostered a community of inclusion and engagement where people are free to express their love for Star Wars and debate, respectfully, the minutiae of Star Wars culture. Steele has opened me up to a community of fans who are among the most likable, loyal, friendly and engaging I've ever met and we're all indebted to Steele for facilitating our connection.

And we get the joke.

We get what "Your Snoke Theory Sucks" really is. It has become a means of connecting, of coming in through the doors of Star Wars fandom and it encourages us to not take ourselves too seriously. It is a love letter to Star Wars by fans, for fans.

I feel sad for those who don't get it. 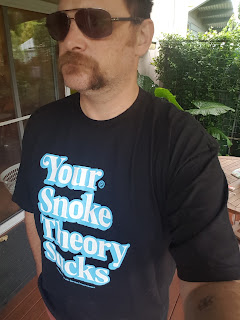 Posted by DeanfromAustralia at 9:12 PM No comments:

This week, I wanted to continue my exploration of pop culture podcasts with a look at a show that I really look forward to in my podcast feed each Saturday morning.

Blue Harvest: A Star Wars Podcast is a show that has quickly come to be my Saturday soundtrack and I look forward to each episode in much the same way that I looked forward to Saturday morning cartoons as a kid - so it has the dual effect of being a satisfying listening experience as well as recalling those affetionate days of my childhood. 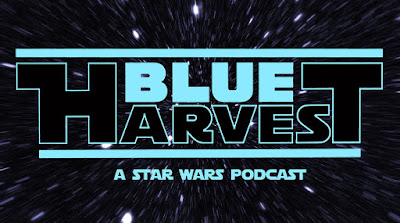 Here's a little nugget of trivia which Star Wars fans will appreciate. Blue Harvest takes its name from the long celebrated "code name" George Lucas gave to Return of the Jedi while it was in production. So concerned was Lucas in 1982 with potential leaks from the Yuma, Arizona set of the film, he concocted an elaborate cover for the production, dubbing it Blue Harvest: Horror Beyond Imagination. He even had T-Shirts and caps made up for the production team, merchandise which commands a high price amongst collectors today.

Taking its name from that Lucas sleight of hand, Blue Harvest: A Star Wars Podcast is hosted by Birmingham, Alabama natives Hawes Burkhardt and Will Whitten. Together they bring a vast catalog of knowledge around Star Wars lore as well as a great enthusiasm and love for the franchise that has fomented in them from their earliest days of childhood.

Whereas sister podcast, Rogue Won: A Star Wars Podcast For Winners draws is strength from its comedic timing and a more bolshy presentation, Blue Harvest is a more intimate conversation between hosts and life long friends Burkhardt and Whitten. They explore Star Wars topics at length, discuss news and insights from the current productions with an authoritative voice and they wade into the tangential, exploring a wide variety of theoretical permutations in Star Wars story ideas and relish in the many "what if" scenarios those ideas throw up. I don't want to say that Blue Harvest is a more intellectual offering than its podcast mates across the Making Star Wars podcast network - but it does delve deeper into areas of Star Wars lore and culture, making it a unique show, unafraid to stand on its own.

Another appeal of Blue Harvest is Hawes Burkhardt and Will Whitten's commitment to musicians in Birmingham, providing a platform for them to showcase their music to a wider audience. The show's excellent opening theme has been generously provided to them by Birmingham metal band Stoned Cobra. A thumping metal track that builds from a subtle introduction, the song has been tweaked with some clever editing and includes key lines of dialogue from all six Star Wars films. These have been stategically placed throughout the crescendoing stanzas of the track and one can't help but get drawn into the powerful refrains from the lead guitar, especially when Darth Vader's voice rumbles satisfyingly along side it. It is a small aside but it helps to define the show in a really clever way.

Blue Harvest: A Star Wars Podcast takes the Star Wars fan conversation to another level and mixes old school childhood enthusiasm with world weary grown up affection to present a weekly show that is the perfect Saturday morning antidote after long working week.

Subscribe to Blue Harvest: A Star Wars Podcast on iTunes.

Subscribe to Blue Harvest: A Star Wars Podcast on Podbean.

Posted by DeanfromAustralia at 6:23 AM No comments: