Bill - wherever you are, I need you now.

Maybe it's because I'm tired or perhaps it's because I'm a little more emotionally responsible than the average male...but my son really tugged at my heart strings today. And my stoic facade cracked.

Xavier has been attending kindergarten. He started just a few weeks ago and he has been enjoying it. He has boundless energy and at the age of three and a bit, Xavy just wants to get in, grab the world with both hands and live it to the full. It's wonderful to experience as a father and his enthusiasm is certainly infectious.

At kindergarten, Xavy has found a little play mate, a little girl named Clare whom he so innocently besotted in. They have played together, sat together, painted and built and shared their milk. And Xavy's cheeks have flushed red whenever he talks about her when he comes home. It's a delightful thing to observe - an innocent, childhood friendship in the burgeoning tradition of say a 'Kevin and Winnie/Wonder Years' kinda thing.

Today, however, something happened to have us all slam into a - figurative - wall.

Xavy came home from kindergarten with a look and a demeanour that could only be described as devastation.

Clare didn't want to play with him today.

And he didn't quite get the message right away. He persisted in trying to join in with what Clare was doing but she apparently and eventually told him to leave her alone - loudly as it were - and it would appear that Xavy's heart got a little trampled.

He was very quiet when he got home. His eyes were swollen with tears and the bottom lip was quivering on and off. Emily, my partner, explained to me what the kindergarten teacher had explained to her.

What can one say? I was completely stumped.

Welcome to the world of socialization, I guess. On one hand, there's the whole thing about Xavier having to learn about what is appropriate and acceptable in the whole social interaction thing/realm/sphere...

But man, he got his heart trampled on today. And do you know what he said to me during bath time this evening?

"I didn't mean to Daddy. I'm sorry I upsetted her"

All rational thought got swept away and I was quite unable to offer any sort of fatherly "stuff". Xavy was just shell shocked.

See - this is all academic really. I, as a parent, should be more than capable of explaining what's right and wrong and all that important stuff - but when a child already, kinda 'gets it', as Xavy did, there's no where to go.

Am I making any sense here?

In the end, all I could do was give him lots of cuddles and tell him that maybe next week it will all be better.

After bath time, we sat down to our new favorite thing - watching re-runs of "The Cosby Show" on pay-TV. The instant those opening credits started, where Bill "Heathcliff Huxtable" Cosby begins dancing with each of the members of the Huxtable family, pulling those impossibly elastic facial expressions, all of our hearts seemed a little less heavy.

Xavy loves it when Bill Cosby pulls those faces.

But, as I said at the beginning - maybe it's just because I'm tired at the moment...I'm just a big baby.

I think I've just added another book to my 'to read' list for the winter... 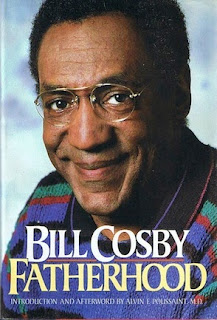 Posted by DeanfromAustralia at 6:15 AM 2 comments:

Where I Am At.

So this is where we are at after month number 5 of the journey that is the Hambledown Dream. After my official launch back home in Gippsland, Victoria in April my publisher and I have been working tirelessly, exploring all avenues that we can in an endeavor to bring the novel to the notice of as many major stores as we can. And our work is paying off.

In May I was kindly hosted by Mostly Books of Torrens Park in South Australia and had a wonderful morning in their lovely book store, talking with customers and signing copies of my novel. In a couple of weeks time Borders/Adelaide will be hosting me for an afternoon at the Rundle Mall store where I will be speaking, answering questions and signing copies for readers. I have been in talks with a number of bookstores both here in Adelaide and over in Victoria in the hope that I can get The Hambledown Dream onto the shelves and so far it has been very encouraging.

In the online sphere, I have made significant progress in promotion and marketing of the novel. I have done several interviews for internet media outlets - mostly notably "The Brink Of Sanity Show" in New York and "The Creative Penn" here in Australia. These shows have a significant global reach and their value - not too mention their hospitality and support - cannot be understated.

It is in the online presence of the book where momentum is building. "The Hambledown Dream" is beginning to show up in the online portals for Borders (Australia), Angus and Robertson (Australia) in addition to Amazon Books who have been carrying the novel in both the digital and eVersions since the initial digital publication back in January. Most significantly however, and I have to admit to slightly "geeking out" about this - in the past 24 hours I have become aware that Barnes & Noble Online - one of the largest booksellers globally - is now carrying the title in their catalog. While this is big in one sense - it's presence doesn't necessarily translate into blistering success. What will drive success of the novel is sales and through the use of social networking portals I have achieved a good result so far.

But there is still more I can do. I have come to appreciate more than anything, the value of word of mouth in both raising the profile of the book - it has been through this where the successes have thus far been achieved.

If you know of anyone, who you think "The Hambledown Dream" would appeal to then please, forward this onto them for them to consider. If you're talking with family, with friends, with colleagues and you think they might like to lose themselves in a lyrical and moving tale of loss, love and redemption with a smattering of the paranormal thrown in - then please tell them. If you have access to the various social networking portals going around, please create a quick wall entry linking it to either here at the Official Site or the entries at each of the stores.

To those of you who have joined me on my journey thus far, I want to sincerely thank you for everything you have done. Even if it was just an encouraging word - it means everything when you are trying to push on. You are my "Dream" team.

Open your heart, touch the words, Live the "Dream"
DFA.
Posted by DeanfromAustralia at 9:07 AM 1 comment:

"Dream" People - Inspirations for the characters in The Hambledown Dream (Part 7 - Simon).

There is one character that has been a mainstay in any of the fiction I have written. It is a quirk of mine that I picked up years ago when I used to flip through the newspaper as a kid looking for the political cartoon by Jeff Hook. In everyone of his cartoons, he used to place strategically, a fish hook somewhere in there and it was one of those cool little challenges for my brother and I to find it. We always did, for memory. Anyway, the hook in the Jeff Hook cartoon was an essential. For me, it defined who he was in a small way.

I am drawing a very long bow here aren't I. 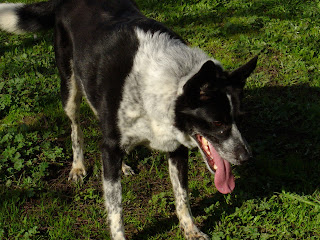 My dog, Simon, is a 14 year old cross bred cattle dog that I picked up from a pet shop when he was just six weeks old. I remember, at the time, going past the pet shop with my then partner and hearing this yapping coming from within. We had talked about getting a dog as young couples do in that stage of the relationship when things become serious...(my observation anyhow) and when we heard his yapping we were instantly intrigued. He was there in a big glass cage in the shop, spinning around in the ridiculously small space, chasing his tail and I knew - even though I was the more reluctant of the two of us - that this pup was coming home with us. I very nearly didn't go ahead with his purchase when he rather unceremoniously squirted a thick stream of poop all over the inside of the glass enclosure but somehow, my partner convinced me that we should dive in. So this little scrap of a pup came home with us. 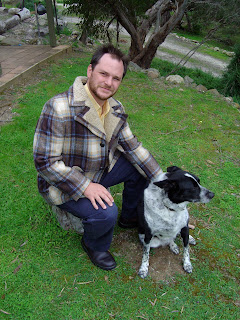 I don't hesitate in declaring here and now, that Simon is perhaps one of my best friends, if not my best friend. Cliched, I know but the shit we've shared over the past decade and a half could well be a book of it's very own. Simon has been by my side through some wonderful times and through some very dark times as well. He knows, implicitly my mood and will come up beside me and give me a nudge with his nose to let me know that he knows what I am thinking. He is a beautiful companion. Though he is much older now and he is starting to slow down a little, Simon remains such an integral part of my family. He adores our children and we had no trouble at all in introducing both Xavier and Lucy to him at the appropriate time. Simon seemed to get it. 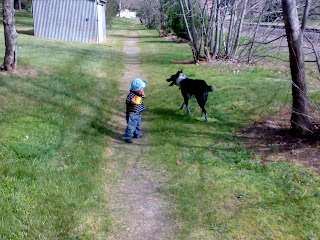 His inclusion in The Hambledown Dream as a character - a fairly significant one - seemed natural to me. I knew that given some of the paranormal subject matter that I was dealing with in the story, there would be a way to incorporate Simon into it and I had no trouble finding that "fit". I remember doing some reading about dogs and their intuition when it comes to detecting serious illness in humans. There was one particular article I read that credits certain canines with being able to detect cancer in humans and that certain medical professionals saw merit in adopting this trait as a diagnostic tool. I have also read that dogs have been written about in terms of their ability to detect paranormal energies - i.e. ghosts.

Without giving too much away, Simon as he appears in The Hambledown Dream, became a fairly significant plot tool in order to reveal certain, major events in the story. This was a pretty big deal for me because I knew early on that what I could achieve by having Simon in the story would help me not only in constructing critical scenes - but he would also contribute to major illustrations of the central characters in the story - most notably Sonya and Denny. Their portraiture, through the eyes of Simon, became an indelible mark that adds gravitas to the underlying themes in The Hambledown Dream.

I love my dog.

Posted by DeanfromAustralia at 6:38 AM No comments: