As I approach completion on the draft of my new novel "Gifts Of The Peramangk", I'm finding myself wielding my camera a lot more in an image gathering mission of sorts. It's designed to help me visualize certain scenes and settings in the novel and it brings me closer to the words I am penning on the page. Imagery forms a large conceptual part of the new novel - how imagery can fire the imagination to deliver a musical performance.


Imagery is no less important in the performance of writing.


The Orphanage, is where the final scenes of the young Virginia's journey plays out and it is a scene that hints at years of heartache after she is rejected from the Penschey farm. As it stands now, the scene is a small one but it carries a lot of weight in terms of the transitioning of the young Virginia and the old Virginia we follow as a grand mother to Ruby. Virginia is to spend 5 years in The Orphanage, after which she is released as a 21 year old to make her own way in life. As a young Aboriginal woman in 1964 Australia, the prospects for Virginia in a country that doesn't even recognize her as a human being, seem bleak. Added to this is the fact that she has been rendered crippled, which will only add to the difficulty of finding her way. Standing on the steps of the Orphanage, a single suitcase in her hand, Virginia fears for her future by confiding in a young nun who has returned to Virginia, the single most important possession she owns that was taken from her once she entered the Orphanage - her violin.


The actual Orphanage, here in Adelaide, no longer serves in the role that it was originally built for, but it stands as a monument to the many lives that passed through it's doors over a century. Built in the 1890's, the Orphanage was run by a Catholic Order of Nuns known as The Sisters Of Mercy, receiving countless children into their care from many varied backgrounds up until 1975.


Walking around the building as I did a couple of weeks ago, I reflected on the experiences of those children and, knowing some of what they experienced through my research, I found myself both moved and ashamed. 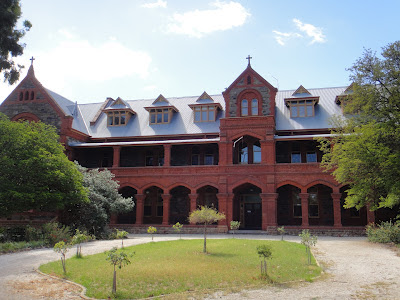 The buildings of The Orphanage definitely carry an aura about them. They are very tall, dark and carry with them a sense of foreboding, which is what I sought to translate into the novel. Standing before them, one feels very small. For a young child of 15 or 16, the effect of these buildings  would surely be frightening in the immediate term and depressing damaging in the longer term. 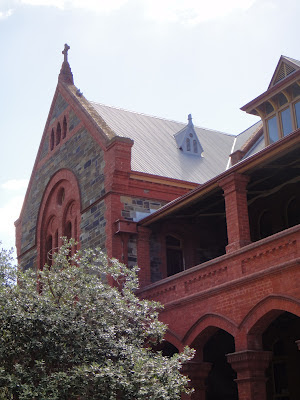 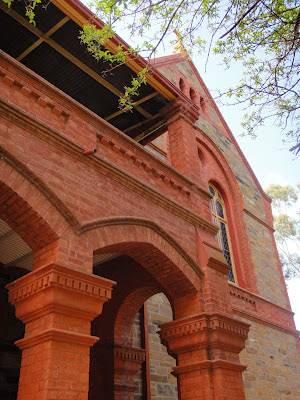 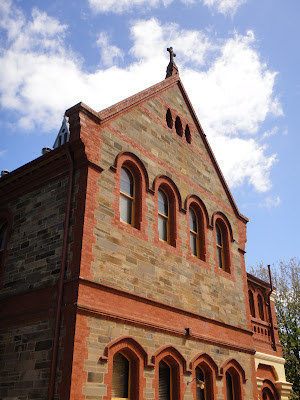 I updated elsewhere this past weekend that I have about four chapters left to write and I will have a completed draft manuscript. Once I have it bedded down, the editing process will begin. I've actually started the process already and have had some wonderful help from a couple of people whose advice has been exquisite.

In the meantime, I apologize in advance if posts become a little sporadic around here. My focus needs to be on the manuscript and getting the novel ready for release. But feel free to poke me if you need a little more DFA conversation.

Posted by DeanfromAustralia at 5:09 PM No comments:

IN my front garden at home, there is a pomegranate tree that has stood there for a long time. I don't exactly know how old it is, nor do I know who planted it. Each year however, it produces a bounty of fruit that intrigued me for the longest time - even though I had no idea what to do with them.


A couple of years ago, my natural curiosity got the better of me and I embarked on a quest to learn about the fruit, it's uses and I discovered that it quite versatile. The most appealing use I found for the pomegranate is its apparent juice properties and I discovered that as a thirst quenching beverage, it is something to behold.


But the process of transforming the fruit to a juice is not an easy one...well, it's not so much a case of it being not easy, it's just bloody fiddly.


This past month - which I should say, seems to be the optimal time for a pomegranette harvest down under - I embarked on what has become a yearly ritual in our little home.
It begins with the harvest itself and involves me up a ladder, scouring the tree for the best fruit I can lay my hands on. It's not an easy task as the tree is dense, it's boughs are tough and they have little protrusions that stick into your skin. Suffice to say, I dropped a number of F-bombs during the few hours I spent cutting down the fruit. 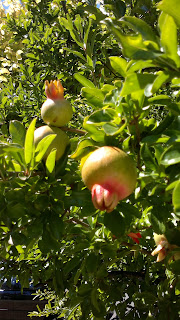 The best fruit are large, about the size of a baseball and they are a deeper reddish-green (more-so than the ones you see here), however I was surprised by the number of smaller fruits that had large, juicy arils inside. Arils are the key to this whole operation by the way and are what makes the final product worth the effort. 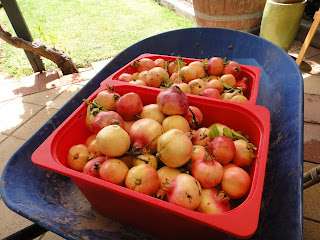 The tree yielded quite a haul of fruit (more than what you see above). I think I had about four or five of these crates all told. The next stage in the process is a sort of grading of the fruit - sorting the best looking, the smaller but still potential, the ones that have split open and have to be discarded, to the fruit that is bruised and thus unlikely to be viable. Once that's done, we move onto the cutting and aril extraction. 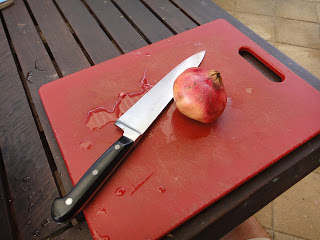 Essential tools for this task are a cutting board, a ridiculously sharp knife and a large bowl of water. I learned throughout the process that if you leave the fruit for a day or two, they actually soften a little, which makes it a hell of a lot easier to flesh them and gain access to the arils inside. The arils, as I said earlier are the lynch pin. They are small pearls of juice and seed which you need to gently extract from within and deposit into the water bath. You're looking for nice, plump, ruby red arils which contain the most juice. 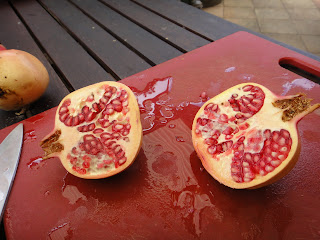 The water bath allows you to wash away the extra debris from the fruit's flesh that inevitably makes it's way into the bowl. The time it takes getting these little jewels out varies depending on how motivated you are and how much fruit you have. I found that having a few beers on hand, as well as a few episodes of Keith and the Girl made the time fly by. Of course, having help is good too but, once you get into a rhythm, help is usually not needed. 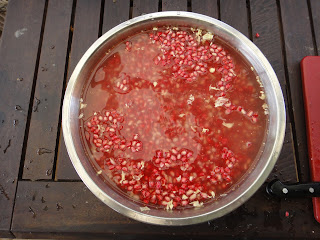 Once you have your considerable yield, the next step is to rinse the arils under the tap to get rid of as much debris as possible. Again, leaving the fruit for a day or two after harvesting softens them up enough that removing the arils is a lot easier and you don't end up with nearly as much debris as you would otherwise have. 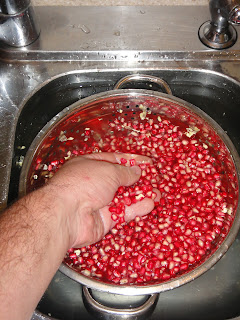 Then it is to the mixer we turn. I had enough arils that I needed to do this step in batches, which is testament to my harvesting skills I guess. Using the mixer, you give the arils a damned good pulse until you see the juice begin to separate from the pulp that is created as a result. This is perhaps the quickest part of the process - and the most enjoyable. 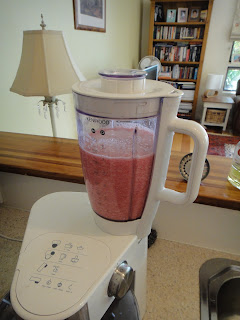 Now we come to the filtration process which, after the harvest and the extraction, is the most time consuming process in the chain - and for good reason. This is where the quality of the filtered juice is paramount and it requires a lot of patience. You'll find yourself having to repeat the filtration process in order to minimize the amount of sediment that gets itself into the final product. 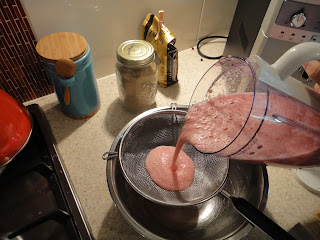 After pouring the juice into a strainer, you need to compress and move the resulting flesh and seed material around so that you can extract as much juice as possible from it. I started giving thought to whether this pulp would be any good as some kind of skin care product for the ladies but for the time being, I decided to dump this pulp. I haven't ruled out a possible tilt at cornering the ladies skin care market at some later date. 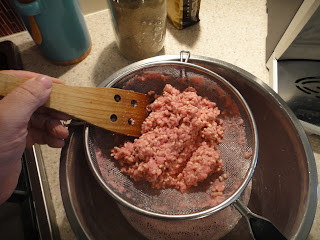 So, after a half hour of straining, restraining, re-filtering and more restraining, you end up with a liquid like this. This image (below) doesn't quite do the juice justice but let me say just how satisfying it is to get to this after everything that came previously. Again, this is just a small sample of what I filtered and I think I kept going at it for a little while after. I kept saying to my serioso during this phase that I wished I had a piece of muslin cloth to capture more of the sediment. I actually ended up using a Chux towel which kind did the same thing, although it was a little too absorbent for my liking. 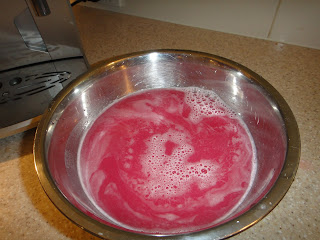 The final product is a juice that has been described as a "super food". Pomegranate juice contains anti-oxidants, it is rich in Vitamin C and it has been said that it even has anti cancer properties as well as a range of cardiovascular health benefits. For me though, it is just a damned fine drink, which is home made and preservative free.

Now the juice on it's own can be a little tart and I have found that requires a little extra to sweeten it. Apple juice is usually a great complement to it. So here you have it - my custom built organically grown pomegranate juice. From this years harvest, I yielded around 6 to 7 litres of juice, which I think is pretty cool from just the one tree. There was still more fruit on the tree even after my harvest but I think I'd had enough of getting spiked. I think I'll employ some more help next year. 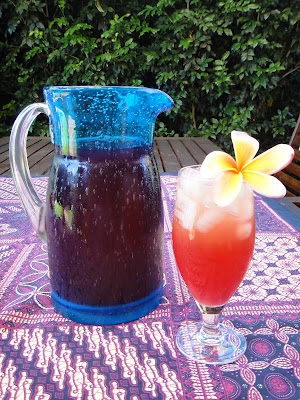 So here's a recipe for a cocktail that I'm sure you'll agree, sounds absolutely amazing.

Posted by DeanfromAustralia at 8:04 PM 3 comments:

Swear and Shake - These White Walls.

This past week, the superlative indie folk outfit "Swear & Shake" (who I featured here at DFA Dot Com last year) released their debut music video "These White Walls" from their upcoming debut album "The Maple Ridge".

I got a sneak peek of the video in advance as part of my Kickstarter pledge to the band, but now the video is official, I thought I'd share it here.

It is a killer track from a band who has gone top of my playlist. Check it out.


Visit Swear and Shake at their Official Site today.
Posted by DeanfromAustralia at 8:14 PM No comments: