I can't remember how long it's been since I've been to a beach.

The sun on my face.

The sand between my toes.

My dog is just as struck by the beauty of the Adelaide beach on which we sit. I've let him off the lead and he's galloped across the sand, his floppy ears flailing like sails. He's snapped at the air like it's some sort of treat. 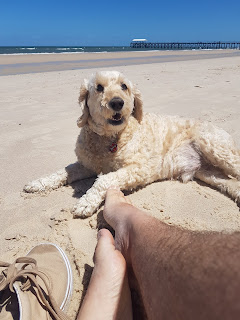 On the beach, I can stretch my legs. I can stride a little bit, even though the pins and needles keep reminding me that they're there. I can accept the pain because where I am feels so bloody good!

There's a young Dad frollicking with his infant son near the edge of the foam as it races up the sand. The boy squeals with joy and it's hard not to smile. Right now - I get it kid.

To sit on the sand with a straight back (because I *have* to keep a straight back) and look out over the jetty. To marvel at just how wide open everything is. The sun and the light! The air! The breeze on my face!

I've been surrounded by the four walls of my house for far too long.

I almost don't care that I move like an 80 year old. That I probably should have taken some pain relief with me. That there's not a toilet close by.

I can see a kiosk nearby.

You know what? I'm gonna treat myself. Yes I am. 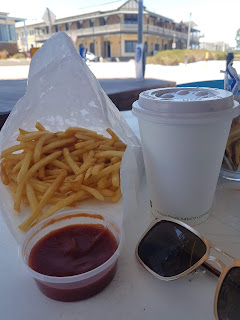 One of the cool things about Twitter for writers is the ability to re-tweet fellow writers. It's become such a ubiquitous function of the platform that many of us do it without so much as a second thought.

Instagram is another social media platform that writers have taken to with enthusiasm. I myself use it a lot. It's helpful in teasing bits and pieces of the projects I'm working on as well as promoting my published titles. It's also useful in helping fellow authors reach new readers by way of sharing their posts. And yet, in my experience, I've yet to see the scale of content sharing on Instagram that I've seen on Twitter.

I'm puzzled as to why it hasn't seemed to have taken off to the same degree. One reason could be that it's not as simple as it is on Twitter. It requires a few more steps to achieve the same or similar outcome. For me, the process of re-sharing or "re-gramming" content is really easy.

I use an app called "Regrann", which I picked up free from Google Play. 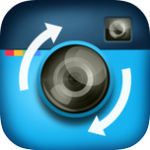 The app integrates with your Instagram app and the learning curve is fairly simple. In order to use it in-situ, all that's required is for you to choose the post that you want to share, tap on the three dot icon in the top right hand corner of the Instagram post and select "Copy Link" from the drop-down menu. The image will then open in a Regrann menu that looks something like this... 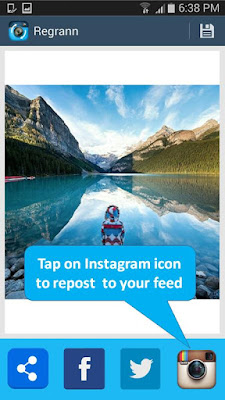 You have several options available to you, but the one we want is the Instagram icon on the far right. Upon tapping this, you're then taken back to the Instagram app where you'll find the image has populated a new post. If you're satisfied with how the image looks, you can tap through to the "Write a caption" pane. Here, instead of writing a caption, all you have to do is tap and hold in the caption pane, triggering the "Paste" and "Clipboard" menu. Then tap "Paste". 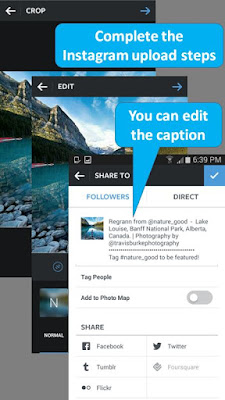 What happens is that the original poster's caption will populate the pane, along with a "Reposted from @(username)" - whose ever that is. Regrann adds a #regrann following the post. You can actually edit the caption as you wish. I sometimes do this if I want to add some content of my own - say, a shout out to the original poster of the content or some extra hashtags if I think they will help.

Once you hit "Share", you're done. The post will appear in your feed along with the accompanying caption that essentially tags the original poster so they'll know you shared their content.

There are numerous apps out there - on both Android and Apple platforms - that will help you achieve the same result and they each have their own individual quirks and functions. For me, Regrann has been the easiest app for me to adopt.

It's a great way of helping your writer and creative friends *potentially* reach a new audience. I see a lot of re-sharing of content among many groups of Instagrammers - but not so much among writers.

It would be a good thing to see more often.

Posted by DeanfromAustralia at 4:47 PM No comments:

The Approaching Storm - A Schwannoma Diary (#9).

See...that's the thing about Schedule 8 analgesics. They're all well and good when you're on them and they are giving a nice little analgesic high. You feel good, existing in a state where you're pain free and can function *almost* normally.

And then the wall rushes up. You slam into it and you realise it was all a fallacy.

No matter how diligent you are in weaning yourself off them, reducing the doses every few days and adjusting, there is always a drop off once the final dose has been taken. And it's a big drop off. I encountered it yesterday when I entered the first day without having the narcoticanalgesics available to me.

The pain in my legs was breath taking. Every step I took was a punishment. And not only was there the pain of impact - from taking a simple step - it was accompanied by a lingering bout of pins and needles, lasting anywhere upto an hour once I'd completed a single instance of walking. An electrical storm in my legs.

Any activity is a war. Finding a comfortable spot in bed or in a chair. Having a shower. Even toileting is a fucking to do.

I'm getting frustrated. I'm getting angry. I'm weeping alot. It takes everything I have to erect a veneer so that no-one sees. I'm a shitty builder. 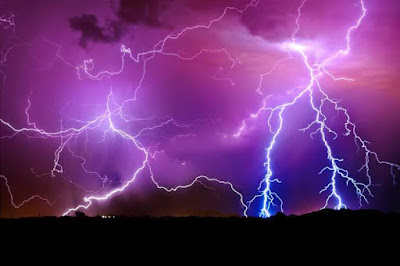 I am able to get some respite from it with Paracetamol and Ibuprofen taken together. But they aren't all that effective. Everything is hard. Even showering. Even toileting.

We're entering a phase of recovery now that isn't going to be pleasant. I have to ride the wave of withdrawal and hope that this will settle in a few days. I have to be patient when pain and patience are the worst of partners.

I have to rely on myself now and I'm not very reliable.

DFA.
Posted by DeanfromAustralia at 2:37 PM No comments: