Picking Through The Broken Pieces - Conversations With Rachel Thompson.

I have been an ardent follower of Author and Social Media entrepreneur Rachel Thompson since around 2011 when her first novel A Walk In The Snark landed on Amazon. Described as a satirical look at men, women and relationships, the novel is a collection of wry and witty essays that were drawn from Rachel Thompson's blog and presented in a roundly celebrated, multi-award winning book. 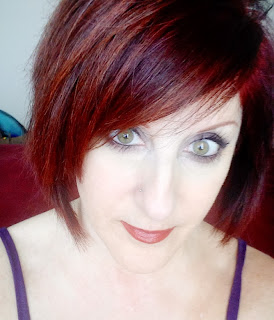 Building on the success of that first literary outing (which she added to with her highly successful follow-up The Man Code Exposed), Rachel founded BadRedheadMedia in 2011 where she works with authors to learn social media, branding, and marketing -skills acquired through fifteen years of successful, award-winning pharma marketing and sales. Thompson has coupled her enterprise with one of the most successful Twitter presences I've seen in recent times. Describing it as a wonderful, fascinating platform to connect with readers, Thompson represents the gold standard in the effective, engaging use of that social media platform.

Her vibrancy, advocacy and entrepreneurship makes her one of the shining lights as an author and a personality.

So, when her third published work Broken Pieces, landed in late 2012, everything I thought I knew about Rachel Thompson was turned on its head - but in the most profound way. 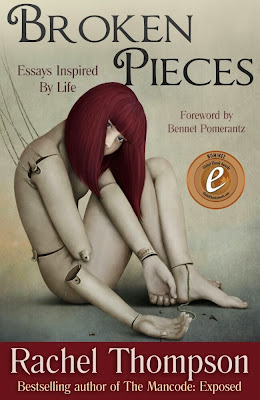 Broken Pieces is as far removed from her previous works as is humanly possible.

Upon approaching the book, I thought that I would read it over a week or so and savor it as I do with most books. I started reading it after finishing a night shift at my hospital and I did not stop until I had turned the last page. And, when I lay down my reader, I sat back. I was stunned. I was moved and I was changed.


Rachel Thompson's series of vignettes have been inspired by life: love, loss, abuse, trust, grief, and ultimately, love again. They examine the deepest and often darkest recesses of her life and they are like a sucker punch to the stomach. Unflinchingly honest, even brutal are descriptions that many reviewers have used to describe this work and I cannot add to those really.

Broken Pieces is indeed those things but there is something more within its pages - a power, a courage, a potential. Rachel's examination of herself is so raw and honest. By allowing us into her world, Rachel allows us to examine her but she also encourages us to examine ourselves. Her experiences here are unique to her, yet they are unique to many of us. And, within that, Broken Pieces has the potential to start a conversation that may well lead to the healing of many like Rachel. One cannot help but be in awe of what she has achieved.

In my conversations with Rachel, I wanted to explore the genesis of Broken Pieces, and I began by asking her what was the impetus for such a deeply personal work.

Well, that’s a loaded question. I never dreamed I would share such private experiences of my past in the way I have. The idea for the book started forming when I started writing my first book, A Walk In The Snark, and some serious things happened in my life -- and here I was writing a humor book.

It put me into a quandary: my book is nonfiction based on my life, and I’m not writing about anything serious – how real is that? So I included a few of the more serious pieces in that particular book, though I continued to write non-humorous essays and such.

Fast forward to book two, The Mancode: Exposed (again, satirical humor), and I had met so many amazing author friends, and had such a great relationship with my editor, that I started writing about my childhood sexual abuse, the suicide of my ex, and other serious topics without fear. They challenged me to dig deeper when I needed to, and I’m forever grateful.

In making the decision to chronicle these intensely difficult pieces of her life, the challenges Rachel would face in that journey would test her like no other endeavor. And perhaps the most significant of these was Rachel's choice of stylistic presentation. Rather than conforming to a narrative with a beginning, middle and end, Broken Pieces reads as a collection of fragmented vignettes which the reader is encouraged to interpret. I asked her a little about those challenges and what she did to overcome them.

I’m so thankful for my brilliant editor, Jessica Swift (@SwiftInkEditor) for understanding that all the ‘pieces’ create a whole. She understood my work from the second we started working together (way back on book one).

I told her that I was struggling with a structure for it – by topic, by style, I was lost LOL. She advised me to put them together in a way that represented the fragmented feelings I had experiencing everything – so there is no typical chronological order that most books have and I love that.

I do get complaints from readers occasionally that the ‘fragmented’ organization bothers them, but that to me is a total win. That’s exactly what I was hoping for.

Arriving at the completion of a work, for any author, is a significant personal achievement. With an undertaking like Broken Pieces - to have trawled through some of the darkest corners of ones psyche - ones human experience - the sense of achievement takes on a significance that cannot be understated. I asked Rachel to reflect on that sense. What did it mean for her.

I imagine like any author feels – like letting go of our baby. I’d experienced that twice before to primarily positive response, but this book was entirely different: I was really putting myself out there, sharing intensely private moments that for years had caused so much shame.

A part of me wondered if people would consider it some kind of ‘vanity project,’ but I think my honesty wins them over in the end. At least I hope it does. I also made sure not to go into explicit detail.

The most wonderful benefit, beside reviews from people I admire intensely (top Amazon reviewer/MidWest book reviewer Tracy Riva, Dr. Bojon Tunguz, a Top 10 Amazon reviewer), so many amazing readers, several awards, etc., and being signed with Booktrope for the print version of the book, has been connecting with many other survivors of childhood sexual abuse and being a voice for so many who can’t or won’t speak out.

Testament to the power of this book, Broken Pieces reached #1 on Women’s Studies and Gender Studies within two weeks of its initial launch and it had garnered almost 55 unique four and five star reviews in less than eight weeks. As it stands presently, Broken Pieces has attracted close to 150 reviews on Amazon alone. In March, 2013, The Midwest Book Review gave Broken Pieces five stars, as did two Top 10 Hall of Fame Amazon reviewers.

Going forward, Rachel has a follow up to Broken Pieces in the works and I have no doubt that it will meet its sibling's expectations and exceed them.

As an author, Rachel Thompson is a astute literary talent, able to cross pollinate genres and retain a familiar voice. She is a risk taker too and those risks have paid dividends. As a business woman, Rachel has poured her considerable experience in marketing and media and occupied a space in the social networking sphere where she contributes - and empowers other to contribute - to a higher standard of social networking. A standard that promotes conversation, the exchange of ideas and self promotion that espouses integrity, rather than blind salesmanship.

Rachel Thompson is a fully fledged human being.


Join Dean's Campaign to have "Gifts of the Peramangk" Reviewed by Kirkus.
(Click Through Below).