I have gone to great lengths in the pursuit of an idea - especially when those ideas strike me at the most inopportune times.

It has been when I've been changing a soiled nappy (diaper) in the parenting room of a major department store and I am up to my elbows in doo-doo. There is never a pen or piece of paper handy. My kid has chewed whatever scraps are available like a tobacco plantation worker chews tobacco or, quite possibly the only pen or pencil or crayon available to me.

It's happened when I've been stuck in the pea-soup thickness of rush hour traffic and suddenly, a brilliant and random idea will crackle in my mind like the proverbial bolt of lightning. An idea so brilliant, I quickly descend into a miasma of desperation when I realize I have left my phone at home or that the pen I have dutifully left in the glove compartment has suffered akin to cerebrovascular event and haemorrhaged ink all over the discarded shopping dockets and scraps of paper that routinely get shoved in there. Desperation quickly evolves into panic. I need to pee. 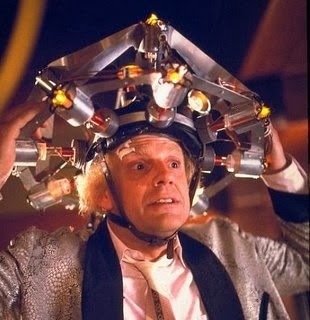 I have resorted to scribbling on nappies (diapers) with whatever implement I can fashion from inside the baby carry bag. I have even gone as far as considering the contents of the soiled nappy (diaper) as an option...

In the end, you'd be surprised how effective a chewed up crayon can be on the front of a Dora the Explorer printed nappy (diaper).

In the case of the traffic jam, I've wound down my car window and sought the attention of the driver adjacent to me. Waving my arms in a messianic attempt to see if they have a pen or pencil and a scrap of paper does present some risks and mostly, I've been looked at like a whacko. Although I will say that, on at least one occasion, it has worked. I have secured a pen and paper from the woman in the car opposite...and her phone number.

Where the availability of my fellow countrymen or women has been found wanting, there is the chance of my locating a public phone booth - even though these are rapidly disappearing. I have devised an ingenious system whereby I will call my home phone from said public phone booth and leave a message with my idea verbally sprayed all over it. I'll follow up this message with a plea to my wife, begging her not to erase the message until I've transcribed it. When I first did this, she definitely used thought I was coo-coo magoos and there were some inadvertent deletions of these, quite animated, voice messages that would border on the insane. But - with any sort of abberhent  behaviour that goes on for long enough - now she kinda lets me run with it.

It does provide an endless source of entertainment for my children who regard the whole thing with fits of giggles when it does happen.

Well kids - well may you say that now. But wait until Daddy's ridiculously famous and you're being chauffer driven to school by our personal driver. You won't be laughing at Daddy then will ya. Huh? Huh??

So. What inopportune times have brilliant ideas come to you? Where were you and were you caught short with nary a crayon or a used diaper (nappy) in sight?

Tell me your experiences.

DFA.
Posted by DeanfromAustralia at 9:19 AM