An article popped up in my Twitter feed this morning that had been re-shared by one of my favorite people, Rachel Thompson. Penned by author and writing coach Rebecca T. Dickson, the article was a personal reflection on the beast that is Twitter and how profoundly overwhelming it can be for a newcomer to this most popular of social networking tools. Dickson's article lead me to think about my own "relationship" with Twitter and I thought it worthy of exploring here.

Of all the mistakes that can be made with Twitter, you can bet that I have made them.

When I first began my Twitter “career” around the time of The Hambledown Dream's publication in 2010, I really had no idea what I was doing. I think I set up my account on the advice of a friend who said that it is "essential" to my "platform". At the time, I was like - ??? - but, eager to adopt anything that would help my efforts to get noticed, I dove in to the ocean head first. 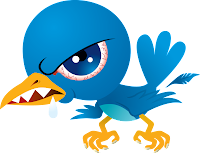 And I tended to observe (the worst of) what other writers were doing, thinking that what they were doing was what I had to do. It wasn't merely a congenial marketplace in which to sell ones wares. Rather, I found it to be a battle - a war almost - to be heard, to get the edge and to be noticed. I used every third party plug in there was available - from friend finders, to re-tweet engines, to group tweeters. I gravitated towards a number of self appointed 'gurus' who were out there making more noise than anyone else, because I mistakenly believed it would give me the edge I needed in the market place where it is all about sales. There is no room therein for connection...or so I thought.

I realized, after too long a period of time, that everything I was doing was completely wrong – that I was doing untold damage to myself as a presence on Twitter - as brand, if you will. I realized that no-one was listening. I was just another voice in the scream - kinda like that scene in Titanic, after the ship goes down and the camera pulls back on the desperate swimmers in the water, fighting to be heard.

I reconsidered everything – dropped the blanket promotion and the third party plug-ins and the (seemingly) desperate re-tweet groups. I began to treat myself, not as a marketing tool and began to take a deeper look at who I was following and who was following me. In the effort to make a sale, I missed out on whole strands of potential conversation in my blind pursuit of...whatever it was I was trying to pursue. I actually lost sight of my goals in all of that white noise from before.

So I began to tweet organically a whole lot more. I began to look more closely for people who were stimulating conversation both with me and with the Twitter-sphere more broadly. I looked at what they were talking about and found common threads of perspective. Since then, my own satisfaction with Twitter has grown exponentially. My new approach has paid off also - in terms of how my content is influencing others via re-tweets and the conversations I have contributed to and those which I have started myself.

And, I have allowed myself to have fun with it.

Do I still promote? Absolutely – I am a published author with two novels, one novella and a contribution to an anthology that I want them to sell and sell well - and I am human after all.

I’ll admit, here and now, that I probably still do the promotion thing too much. But, I am far more disciplined than I was. I'll slip in the occasional promo tweet here and there but that is not my motivation for my presence on Twitter anymore.

I have learned the lesson of the Twitter Beast.

DFA.
Posted by DeanfromAustralia at 9:08 PM