The Victorian Trooper #4 - Brush With A Brushranger.

The township of Marysville, nestled in the vast Yarra Ranges National Park in Victoria, was established in 1864 as a way point for prospectors heading to the gold fields of Woods Point & the Upper Goulburn. With the establishment of the Yarra Track, Victoria had its first, major eastern arterial and Marysville, which had initially struggled to cope with the regular transit of prospectors, trades people, professionals and families, had - by 1870 - begun to prosper and its population swelled accordingly. The need for a policing presence in Marysville was the subject of numerous requests to Melbourne from the nearby stations at Healesville, Woods Point and Jamieson. Increasing reports of crime had been received from those stations and the evolving population at Marysville were growing fearful.

We have documents in our possession that puts Joseph Ladd Mayes in Marysville in August 1867 and in command of "a" station. I emphasize "a station" because, the doucments reveal that Marysville did not have a dedicated Police Station at that time. After some considerable amount of to-ing and fro-ing between Marysville & Melbourne between Jospeh Ladd and others, a house became available for the Victoria Police to purchase from a Mr. Robert Mayne, Marysville's storekeeper & Post Master and, on the urging of Jospeh Ladd, the property was secured.

It was soon discovered that the property was a less than stellar purchase.

Throughout 1868, Joseph Ladd corresponded regularly with Victoria Police, detailing his requirements for the newly acquired police buildings at Marysville. On July 29th, 1868 for example, he forwarded a comprehensive list of repairs to the OIC at Jamieson Station that included;

"Outside of building will require require painting, spouting (which was not originally supplied). Chimneys, being built of slab and paling, inside lined with brick and stone, will all require to be fixed, the foundations having sunk. The wall paper in the rooms is loose and hanging and would require a general overhaul. One door and fastening is required for yard purposes, there being no back door to the premises, and all the other doors will require overhauling and painting. The water closet will be required."

The correspondence continued throughout the remainder of 1868, with Joseph Ladd routinely requesting additional funds for repairs and improvements to the Marysville Station - and he got them - some 30 pounds in funds. It becomes clear, reading through the documents that he wasn't one to settle for half measures and he knew what was needed for a well equipped station.

Joseph Ladd quickly established his reputation across the district as a thorough and principled lawman who commanded respect. Entries transcribed from the original Marysville Station watchouse record along with his official police record details of investigations, arrests made and prisoner outcomes. One can view numerous reports of his good conduct written in an exquisite cursive copper plate.

With three growing children in John Adolph, Sara and Rebecca, we can assume Joseph Ladd & Mariann Mayes lived a contented life in the township where they were, by all accounts, a well liked family. 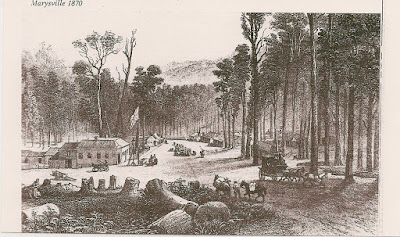 With the rapid eastern expansion - off the back of newly discovered gold deposits at  settlements like Woods Point, Jamieson, Jericho, the Upper Goulburn and Walhalla, it was inevitable that crime would follow. Now established in Marysville, Joseph Ladd would encounter lawless bushrangers and devious men - not only among the civilian population but within his own ranks. By the close of the decade, several notable criminal figures had emerged in Victoria and were garnering considerable notoriety.

One of these figures was a bushranger known as Harry Power. 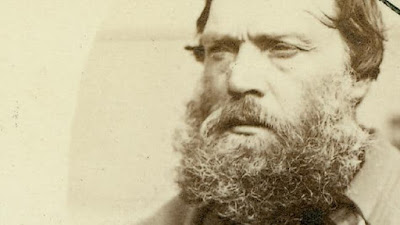 Born Henry Johnson in Waterford, Ireland in May, 1819, he grew up in Lancashire, England becoming an apprentice saddler at aged 16, then joining a peasant uprising against British troops. During this time, Johnson received saber wounds to his right cheek and brow, which were to become his distinguishing marks.

Having been charged and convicted of stealing a bridle and saddle in Lancashire, Johnson was sentenced to 7 years imprisonment and transported to the colony of Australia. By 1848, Johnson, now a free man, had moved to Sydney and took up the permanent identity of Harry Power. Power was engaged driving cattle all over this colony and New South Wales, and afterwards in exploring and cutting a track across vast swathes of the colony. In a few years he became a competent bushman, knowing almost every mile of the country. During all this time he appears to have engaged in honest living, even keeping horses near Geelong in Victoria.

However, Power was charged with horse stealing near Sandhurst, Bendigo in an incident that has since been considered questionable. Regardless, Power was sentenced to several years in gaol, after which it seems, he turned to a life of crime for several years. It was during this period of time, that Power had recruited a protégé, a talented young horseman named Edward Kelly. 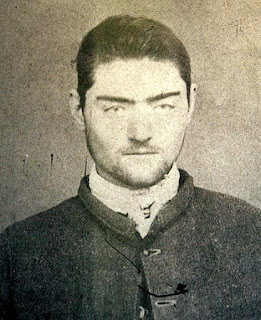 Having come onto the radar of the Victorian Police Force, following a brazen prison break by Power, Superintendent Frances Hare turned to Joseph Ladd Mayes at Marysville when it came to light that Harry Power was operating in the Mansfield area in North Eastern Victoria. A significant reward of 500 pounds had been offered for the capture of Power and in 1870 Hare tasked Joseph Ladd with putting together a crack team to deploy into the ranges in an attempt to arrest Power.

Joseph Ladd together with a Constable Potter and and aboriginal tracker set out from Marysville, moving along the Acheron track (now the Maroondah highway) through rugged bush land. Gathering intelligence from a number of local property owners, it was confirmed that Harry Power had indeed been seen in the area of Mansfield. One landowner named Bindon had pointed the trio towards a tree into which Harry Power had allegedly cut his signature.

The most significant piece intelligence however, one gleaned by Joseph Ladd Mayes himself, was that Harry Power regularly visited the home of a Jimmy Quinn at a settlement called Glenmore. The trio was told that they could stake out the Quinn property with a strong likelihood that they would catch Power successfully.

However, in order to get close enough to catch Power they would have to leave their horses and supplies at Mansfield and head into the harsh country around Glenmore on foot. 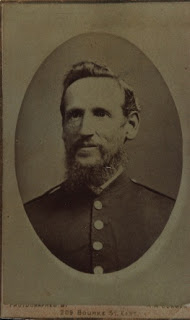 (Joseph Ladd Mayes - by 1870, he was in a senior role at Marysville in Victoria.)

The trio continued on to the Mansfield depot where they were confronted by a police party of about 14 men lead by an imposing Superintendent named Furnell.

Upon being questioned rather forcefully by Furnell as to why they were here in Mansfield Joseph Ladd said that they were acting on the orders of Superintendent Hare and that they were attempting to catch Power.

This apparently did not sit well with Furnell who was most likely after the very same man. Furnell's indignation was recalled vividly by Joseph Ladd in 1882.

Joseph Ladd was to add during that recollection that Furnell;

"...seemed as if he were going to jump down my throat." 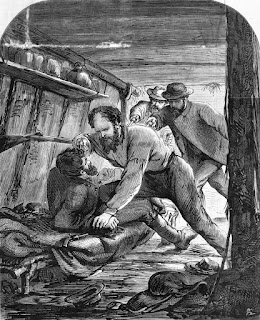 Joseph Ladd, Constable Potter and the aboriginal tracker were forced to return to Marysville as they were ordered. Joseph Ladd was of the view that Furnell ranked higher than Francis Hare, therefore he had no choice but to obey. And so they returned - without giving Furnell any of the critical intelligence that would enable them to capture Power and end a infamous bush ranging career. Furnell hadn't given them the opportunity.

Joseph Ladd Mayes instead filed a report to his trusted superior Francis Hare. Two weeks later, acting on that very report, Francis Hare and Superintendent Charles Nicholson successfully captured and arrested Harry Power - in the very place that Joseph Ladd knew the bushranger would be - the Quinn property at Glenmore. 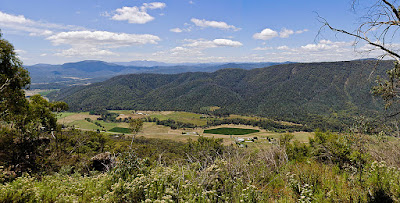 During the 1882 Royal Commission Joseph Ladd was asked whether he felt he had been deliberately shifted by the Superintendents so that they would be positioned to capture and ultimately take credit for the arrest of Harry Power. Joseph Ladd replied no. It was his belief that Frances Hare would have trusted Joseph Ladd's ability to catch Harry Power unequivocally.

"I do not believe there is any man in the police force would give a man more credit for an act he would perform than Mr. Hare." JL Mayes, May 1882.

One questions whether Joseph Ladd was perhaps naive on this point as it was known that fierce rivalries existed among the senior police not the least of which between Frances Hare and Charles Nicholson.

The capture of Harry Power is said to have been the spark for a wider conflict between the Victoria Police and their enemies in the colony - inspiring bushrangers and lawless men and women to defy the establishment. Among these was Harry Power's protégé, Edward "Ned" Kelly, whose rise to infamy is well documented.

For Joseph Ladd Mayes, it seems he returned to Marysville where he continued as the senior officer through until 1874.

One precious artifact that survived in physical form at the Marysville Police Station was the Station's Watchhouse Log. Several years ago, the great grandson of Joseph Ladd Mayes - Stephen Mayes - recalls visiting the Marysville Police Station and being able to view the duty book first hand. This was a huge leather bound document, in which all pertinent information relating to the running of the station was recorded. It carried information about the running of the station, prison entries, progress reports and other information. Due to its size, Stephen recalled that the book had entries dating back to the time when Joseph Ladd Mayes was stationed at Marysville. His own handwriting appeared in several pages of the duty book.

Tragically, that duty book was lost during the Black Saturday bush fires in February 2009.

A little known aspect of Joseph Ladd Mayes' life - that only came to light fairly recently in our family - illustrates the esteem with which Joseph Ladd Mayes was held by the senior ranks of the Victorian Police Force. An opportunity arose for Joseph Ladd to undertake a secondment of sorts abroad and he took time out from his active duty role at Marysville to fulfill the request.

Next: A Sabbatical Abroad...

DFA.
Posted by DeanfromAustralia at 3:45 AM