The Victorian Trooper #2 - Becoming A Lawman.

The colony of Victoria in Australia was undergoing a period of rapid expansion in the mid to late 1850's, owing to the gold rush that had first taken hold in the Ballarat Gold Fields. Prospectors and fortune hunters, eager to capitalize on the potential riches to be found, poured into the colony from all over the world.

Among these arrivals, the young Mayes family alighted onto the Melbourne docks, no doubt exhausted from their long sea voyage from the United States. One can imagine they were eager to take advantage of the economic boom resulting from the gold. For the first six months in Victoria, Joseph Ladd put his agricultural skills to use, working as a gardener under a Mr. Ferguson. Details about this period of time are scarce but settling into a new colony - a new city that was vibrant and alive as Melbourne was would no doubt have been exciting.

The expansion of the colony also saw an attendant rise in criminal activity, ranging from horse stealing, coach hold ups, petty crime and murder. Following the establishment of a police force in 1853 the colony embarked on an aggressive recruiting drive to cement a law and order presence to counter the crime wave of the early 1850's. From anecdotal accounts passed down through family conversations, Joseph Ladd Mayes was a man of integrity and had a strong sense of morals and ethics. It is particularly evident throughout the latter half of his life in the various documents my father has uncovered in his own research. In any case, Joseph Ladd Mayes answered this call and on the 20th of December 1858, 6 months after arriving in Australia, he was sworn into the Victorian Police mounted constable - no. 1477. 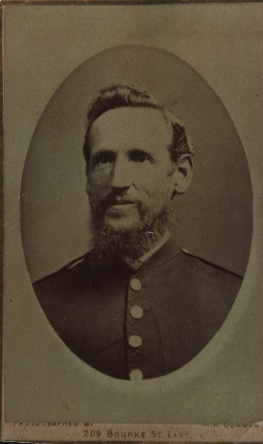 The Police Department certificate records this swearing in at 'the depot' - probably the police depot in the Richmond suburb of Melbourne. His initial salary was indexed at 9/6 per diem not including allowances. He supplied a 'Sir L.... Palmer as a referee. 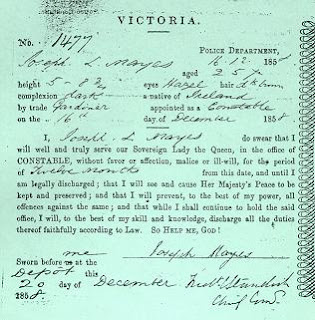 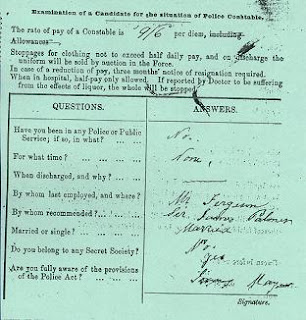 (Copies of JL Mayes' Victoria Police application certificate and physical examination. Click on each to open
a larger version.)

We can ascertain that Joseph Ladd spent at least 6 months at the Richmond depot where he would have received training as a mounted constable. The training itself was reportedly, grueling, with cadets required to complete regular drills, maintain their horses, saddlery, uniforms and firearms. The accommodations at the Richmond depot were basic, consisting of canvas tents that saw up to 8 cadets sleeping side by side in cramped quarters. Joseph Ladd's police record, which forms a part of our family collection, contains very little from this early period, save for a single entry in October, 1859 when he was cautioned for not having his police cap when turning out for gold escort duty. 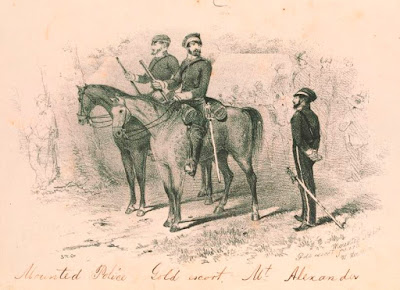 In giving evidence to the Royal Commission into the Victorian Police Force much later in 1882,  Joseph Ladd Mayes made the statement that he believed the proper training of a mounted constable should take not less than six months during which time his services should be employed in the metropolitan area. Given this it is reasonable to assume that Joseph Mayes did spend a probationary period working in Melbourne.

It was to the gold fields of Ballarat however, that the Victorian Police Force were focusing their resources - given that it was the epicenter of the gold rush at that time and where, no doubt, a nexus of crime was located as well. Reports of highway robberies, thefts from stores and tents were coming in regularly. Horse stealing had ramped up to almost epidemic proportions and even murders weren't uncommon. The need for a motivated police presence at the gold fields was considered urgent.

Having completed his training and probation, Joseph Ladd, Marrian and their infant son Charles gathered up their belongings once more and were dispatched to Ballarat. It would be here, however, that the young Mayes family were experience significant hardship and untold tragedy.

DFA.
Posted by DeanfromAustralia at 5:49 PM