In 1860, Mounted Constable Joseph Ladd Mayes was posted to the Ballarat Gold Fields where he spent some three years at the tiny settlement of Pitfield in the Pigoreet District - southwest of Ballarat proper. 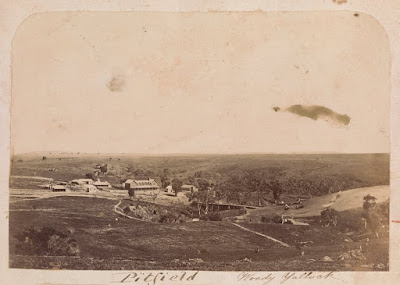 Tragedy was to befall the young family not long after their arrival when Joseph & Mariann's son Charles Mayes died on the 15th February 1860. The death must have been a cruel blow to them, particularly at the time when Mariann had just given birth to their second child on the 23rd January 1860, a boy, which they named John Adolph.

Living conditions in the newly established district would have been hard and unforgiving. In an article for the Sovereign Hill Education Blog, the author details a number of childhood diseases that were prevalent on the gold fields.

However, children were most likely to die from drinking water contaminated by human ‘poo’ … Horrible diseases like dysentery, cholera and typhoid killed thousands of children during the Victorian gold rushes."

Indeed the fate that befell the young Charles Mayes was a particularly tragic one. The death certificate records the cause of death as "Scarlatina & Diptheria - 6 weeks".

Despite this tragedy, Joseph Ladd and Marrian brought another two lives into their world, after John Adolph - Rebecca (1861) who was born in Buningyong near Pitfield and Sarah (1863) who was born in Pitfield. 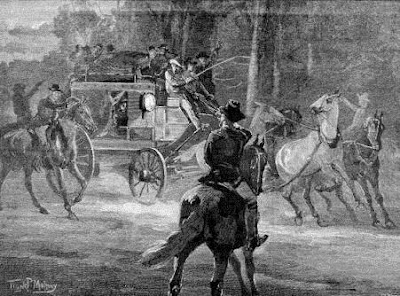 An artist's engraving of a 'bail up' - similar to that which confronted the Gold Escort (State Library of Victoria).

As I mentioned in my previous post, lawlessness was rife throughout the gold fields. Fear of being exposed to dangerous criminals would have been a constant. It was here in the Piggoreet District that Joseph Ladd established a reputation as a tenacious policeman.

One notable account was that of a conspiracy he'd uncovered when a prominent gold rush banker named Thomas Ulick Burke was murdered by two men named in the 1882 Police Royal Commission as Break O' Day publican George Searle and his employee Joseph Ballan.

One of Thomas Burke's tasks as bank manager was to travel throughout the Woady Yaloak diggings buying gold from miners. By this stage gold transports were no longer accompanied by armed escorts.

Early on 10 May 1867, Burke collected a horse and buggy from the Smythesdale coach-builder and traveled to the Break O’ Day area (now Corindhap, Victoria), arriving at the nearby town of Rokewood at 1130 am. He bought gold at Rokewood and Break O’ Day, then left to make the return journey to Smythesdale, stopping at hotels along the way to buy more gold.

It was on this return journey that he was intercepted by Searle & Ballan, whose intention it was to rob Burke and make off with the gold shipment. They carried out their robbery and Thomas Burke was murdered in the exchange.

Spurred to action, Joseph Ladd Mayes initiated a swift investigation into the murder and tracked down the gold shipment to Searle's Hotel at Break O' Day. Soon after, he arrested George Searle and Joseph Ballan and, following protocol, delivered the murderers into the hands of the Detectives at Ballarat.

It appears, however, that Joseph Ladd's efforts had ignited jealousies in fellow police officers.

Officers Hill and Ryall of the Ballarat police had themselves, reportedly, invested much time and resources in trying to solve the Burke murders without success, and were so incensed that Joseph Ladd Mayes had instead brought the murderers to justice, that they tried to discredit him in the aftermath.

Now imprisoned in Ballarat awaiting trial, Hill & Ryall forced a confession from  George Searle, effectively taking credit for the investigation and arrest. They then blocked Joseph Ladd from giving evidence at trial - in which Joseph Ladd Mayes no doubt would have exposed Hill & Ryall as liars. His expulsion from the official record prevented Joseph Ladd Mayes from receiving the 500 pound reward on offer for the capture of the murderers.

During their trial, Searle admitted to the robbery but sought to have his charge of murder reduced because it was Ballan who had shot Burke. They were tried at Ballarat by Judge Redmond Barry, who convicted them both of murder and sentenced them to death. Searle and Ballan were hanged at the Ballarat Gaol on 7 August 1867 and buried in the grounds.

There was clear evidence that Joseph Ladd's efforts were crucial in bringing the Burke murderers to justice. His role was acknowledged by the Victorian government and from the Bank that was to receive the gold - he was awarded 25 pounds respectively by both institutions. The Break of Day mining company - upon hearing of Joseph Ladd's treatment by the Police in Ballarat - also took a collection from it's workers of a further 25 pounds which they presented to the Constable with gratitude. 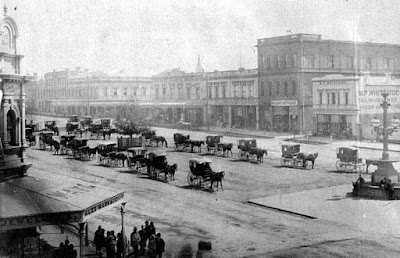 Despite this Joseph Ladd did not have his role officially acknowledged at the time of the case. Even more troubling was the ongoing treatment of Joseph Ladd by the Superintendent of the district and the other officers. Joseph recalled during the 1882 Royal Commission that he and his family was persecuted to such an extent afterwards that he feared for his family's lives.

"When I found that Superintendent Hill and Mr. Ryall had such a down on me, I applied to leave the district forthwith". JL Mayes, 1882.

He returned to the Richmond depot, effectively being reduced to the status of a trainee, for a period of six months. However he received a new posting, to the small settlement of Raywood just north of Bendigo - which was then known as Sandhurst.

An unfortunate series of events happened during this transfer. When Joseph Ladd received his orders, he had asked a colleague to pack up his belongings while he prepared this family for the journey. The colleague mistakenly packed a pair of boots, belonging to a foot constable, into Joseph Ladd's trunk and the error wasn't picked up by anyone until after he had left for Raywood.

Mistakenly believing an act of theft had occurred, a warrant was issued for Joseph Ladd's arrest and police were dispatched from the Richmond depot. Upon being confronted with the charge of theft in Raywood, Joseph Ladd Mayes was arrested and taken into custody - first at Sandhurst, after which he was transported back to Melbourne where he was held at the Melbourne Gaol, pending an appearance before a Magistrate. On the day of his court appearance, Joseph Ladd recalled that Mr. Ryall - his nemesis from the Burke murder case in the Ballarat - had been appointed to prosecute Joseph Ladd.

The affair was to have a swift resolution however, when the constable who'd packed up Joseph Ladd's trunk at the Richmond depot, realized what had happened and presented himself to give testimony. Joseph Ladd was exonerated of all charges against him and the matter was considered closed.

The whole sorry saga had a significant impact on Joseph Ladd. Humiliated despite being cleared of the charges, he felt he was unable to return to the posting at Raywood - having been arrested so publicly and shamed by the incident. He implored his superiors, not to force him back there where he felt he would be doing a disservice to the image of the Force. Of greater concern to him though, was the effect it had on his wife Mariann. In giving evidence to the Police Royal Commission in 1882 Joseph Ladd describes the effect.

He was convinced that these events contributed to a nervous breakdown that would "eventually kill her", even though Mariann was to live on for another 15 years after this episode. Reflecting on the events in 1882, Joseph seems to suggest that Mariann might not have recovered mentally or emotionally from the stress of that period, which is quite possible. 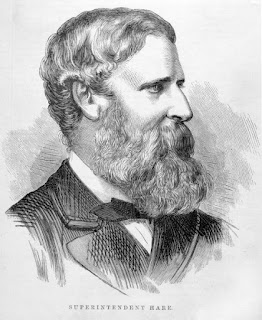 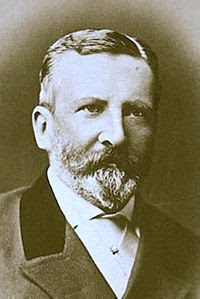 The family remained in Melbourne after the court case, while Joseph Ladd awaited the processing of his application for a new posting. He wasn't to wait for long. Having friends in high places of the calibre of Francis Hare and Frederick Standish was a fortunate plus arising out of the Ballarat affair. They knew who Joseph Ladd really was and they trusted him implicitly. And sure enough, a posting arrived that would put Joseph Ladd right into the centre of one of Australia's most notorious periods...

Next: A Brush With A Bushranger...

DFA.
Posted by DeanfromAustralia at 2:17 AM