Yesterday, I achieved a small-ish milestone when, having used Scrivener for about a month now, I was able to compile a huge mess of documents, disparate notes, random passages of text and completed Chapters into one entire, coherent document. The process took me the better part of about 6 hours but it was totally worth it.

I now have a manuscript comprising a total of 19 chapters, with some additional material that I hope to compile this week which will add another 3 completed chapters to the manuscript. I've set a target of 30 chapters for the final manuscript so, you can understand that I'm a little excited that the finish line on this phase of the project at least, is in view.

Looking at the overall project in it's current state, I can identify a number of additions I need to make which aren't huge additions, but they will give additional flesh to both the characters and the story. And I've gotta say, Scrivener is one of the coolest tools I've ever used to put together a project. Even though my user level is pretty basic, I've been able to learn a great deal about the project and I'm able to see things much more clearly.

My output has increased exponentially over the past couple of weeks and I am certainly feeling a whole lot better than I was a month ago.

Anyway, I couldn't resist taking a screen shot of where I am at. Apparently, having pictures on your blog is a good thing. 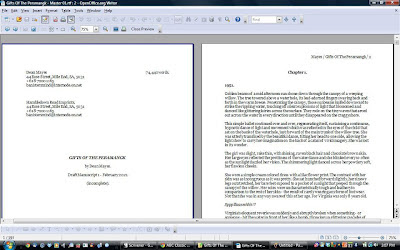 Posted by DeanfromAustralia at 10:51 AM