I am really proud to feature this week, a scribe who I think is an amazing writing talent.


Andrea Costanzo resides currently in Northern Italy and he is one of those rare individuals whose ability to communicate beyond boundaries is something quite exceptional. Andrea and I have enjoyed many conversations over the past couple years. We have discussed writing, life, depression and happiness, music and madness and all points in between.


Writing as The Junkenstein, Andrea is the persona behind the blog "Making Angels Cry" and, more recently, the weekly music podcast "The Junk's Trunk" in which he show cases some wonderfully eclectic music from around the world. He is this kind of explorer, if you will, of life as we know it.


Late last year, Andrea produced a piece for Making Angels Cry that, quite literally, blew my mind. Entitled "Rita", the piece was an emotion charged vignette of a woman whose life was marked by tragedy, struggle, torment and pure love. It's power lay in the unpolished beauty of it's voice, the rawness of it's style and the impact of it's protagonist's presence.


After talking with Andrea, I asked him if I could feature this piece here and he has kindly given his blessing. 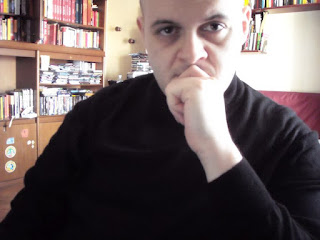 
There was this girl. I dont know what her dreams were. She never told me, really. But when she was a kid, she was raised in a loving family; her, her sister, her father and her mother.


They were dirt poor, and not in the way people use the word today. They were seriously fighting each day to survive. The mother worked in the rice planations. It was a nasty job. You were stuck in swampish water all day, surrounded by water snakes and it slowly destroyed your back. But it got her money to raise her kids. Her sister was a "special" kid. No clear defnition of what she had, she was normal, but she had a mind developed slightly slower than the rest.


The father - who the girl loved more than anyone else in the world - was a worker in the train station and tried to make ends meet with other work as a handyman.


They loved each other. One day a form of illness, maybe meningitis - no one was sure of anything back then - it took the younger of the girls. She fell asleep. And she died.


After a while, the mother, broken down by grief, got hit by leukemia. She died too.


The girl, whose name was Rita, and her father were each other's world - the beginning and the end. The man did everything he could to full his daughter's life with love, to be enough of a family for her, to be her strength and to protect her from the pain of all that loss.


Rita had grown strong, intelligent and witty. She was a brilliant student, although she never went to University cause she couldnt afford it. She found a job quickly though and was great at it. The father was proud.


She also had started dating the son of a rich family. He wasn't a bad guy. Weak perhaps. A bit spineless - broken by a family who raised him with a steely disdain for him, his fists and his anger. But he loved her, it seemed, and he could've made her ... maybe ... happy?


Yet her father drank too much. Pain is a bad beast to cage. And that took his toll. He died eventually, of liver failure.


Rita was left alone in the world. All she had was this man she was dating. He seemed to love her, and she loved him back with all his flaws. Maybe his family could have been a family for her too. One that gave her love ... security.


It didn't happen. The two married. But the man's family always hated Rita and did everything they could to humiliate her ... hurt her ... and make her life miserable.


It hurt. Because this man wasn't on her side. He was a slave to his family, too scared to protect her.


Too weak to react.


And then they had a baby. And Rita loved the baby the moment their eyes met. That baby was all she lived for. If only her family was there to see him, they would've been so happy.


Her husband's family kinda rejected the baby too. But she would defend him at any cost. Even if she was completely alone in this.


And the year passed. And the solitude and pain became stronger. She started drinking more and more. Her husband became meaner with age, he never understood how to be a husband or a father. All he could do was yell or say cruel things. Or simply say nothing at all. He would disappear when he was needed. Left her to do everything.


And the more difficult her life became, the more she drank.


And when the baby grew, he drank too. And he disappointed her as much as a son could. He went into drugs, failures, and all the mistakes a son can do.


Rita became a wreck. Drinking all day and night. Embarassing herself. Becoming a problem and a reason for her husband and son to point their greasy fingers at her.


She was a good mother but with every drunken moment of hate, those memories of love got erased.


She did things that slowly destroyed the love that her son and her shared.


And it turned, maybe to hate.


But when she visited him one day, barely walking, unkempt hair, aged beyond her years, crushed by alcohol, pills and cigaretetes and so many attempts at suicide...


She asked him about his coughing. His flu. She gave him a homemade remedy.


And while he hated all the hurt that she brought to her life via the bottle, he could not stop his heart from shattering, seeing her like that. He would ask her to get checked, but she refused.


All she wants now is to die. And maybe join her family, somewhere. What is left on this earth has hurt her so much.


And when they parted, his heart ached so hard.

Copright © 2011 Andrea Costanzo. Reproduced with permission by Hambledown Road Imprints.
Posted by DeanfromAustralia at 7:20 AM