Defiance Rising - A Look At "Mortal Defiance" by Nichole Chase.

Well here we are hey? 2012 - and no sign of John Cusack...yet. I hope your holiday season was a grand and warm one and you're entering the new year with good things to look forward to.


In this, my first post of 2012, I wanted to return to Savannah, Georgia where, last year, I visited with a stellar new author, the totally charming and lovely Nichole Chase. During 2011, Nichole made a rather large splash in the indie book world with her debut novel "Mortal Obligation", the first book in a three book cycle badged as the Dark Betrayal trilogy. I featured "Mortal Obligation" here at DFA Dot Com back in September and I said then that, in a ever growing dearth of paranormal fiction, Nichole's work was definitely a huge shining light and it gave the genre a massive dust and polish. Her writing features well drawn and engaging characters, cracking and intense plot with touches of hip humour and an overall sense of 'realness' and 'grittiness'. I chatted at length with Nichole about the book and the series and she promised that we would see Book 2 before the close of 2011. True to her word, book 2 "Mortal Defiance" did hit the shelves in December and already it has garnered a enthusiastic response from readers who, like me were eager to read more about the understated heroine Ree McKenna. 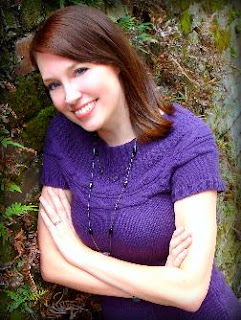 
One short week turned Ree McKenna’s life upside down. Not only does she have the weight of the world on her shoulders, but she still has to juggle homework, a job, and a curfew. While Ree tries to find her footing amidst the chaos, the Dark Ones and their champion are busy hunting down any humans that have a touch of the gods running through their veins. Allies have turned into foes, and enemies have become stronger.


The world is growing darker, but the passion between Ree and two irresistible guys blazes hotter. Romantic ties from a past life will threaten to break Ree away from the love of her life and will cloud her judgement. In order to follow her heart, Ree will break rules put in place by the gods, risking her life and the lives of her friends in an act of Mortal Defiance. 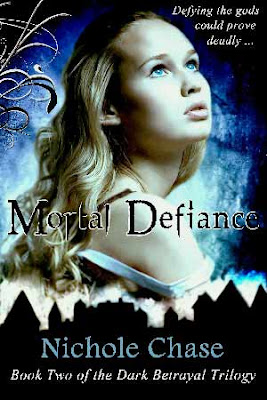 The premise certainly promises much and, true to form, Nichole Chase delivers, imbuing her rich world with added depth to the characters, heightened tension to her prose and more of the cinematic flourishes that made "Mortal Obligation" such an engaging jump off point. As the title suggests, there is more at stake in "Mortal Defiance" with the Dark Ones ramping up their campaign and wreaking havoc and the heroine, Ree, struggling with her own internal conflict. For a 17 year old girl, living in the midst of a somewhat normal life whilst dealing with a potentially cataclysmic 'other world', it makes for a compelling reading experience. Nichole's deft hand as a story craftswoman, again shines as she handles the multi-faceted plot line with all it's inherent complexities while maintaining a 'spunkiness' and a dark humour which is intelligent and appealing. "Mortal Defiance" is kinda like Star Wars "The Empire Strikes Back". It takes all the ingredients that made the first instalment so successful and adds to it - depth of character, heightened stakes for the characters and a richer world to explore and experience. As such, "Mortal Defiance" is a resounding success and one that will set the stage for a thrilling finale when book 3 lands.


As I did back in September last year, I was able to catch up with Nichole this past week and over a couple of glasses of South Australian sauvignon blanc in the foyer of the Marriott Hotel in Savannah, GA ( *massive disclaimer* ), we talked about the response to book one, the evolution of its central protagonist, Ree McKenna and the Dark Betrayal trilogy from book one to book two.


*   It's great to catch up with you again Nichole and I've gotta say from the outset - Well done you! You've made quite a impact with the Dark Betrayal series and have garnered some wonderful feedback for "Obligation" and "Defiance". How does it feel to have achieved so much and how has that shaped your writing going forward?

It was one of my wildest dreams come true - last August I published a book. Then another dream unfolded before my eyes. People began to buy my book and even better, a bunch of them seemed to really enjoy it. I could hardly believe it! And then a thought occurred to me; One that I had barely hoped to ever be faced with. I had to get crackin’ on book two.


Holy bejeezus, was that thought exhilarating. And horribly frightening. I sat at my desk, late one night and stared at my keyboard. Writing a second book should be easy! I’ve already done it once, right? Yeah, the pep talk didn’t work on me either.  There was a whole new set of expectations at this point. There were flesh and blood readers invested in the story that I had created. And while I already had the entire trilogy outlined, I felt a little lost. I didn’t want to disappoint anyone and that became one of the biggest obstacles to writing Mortal Defiance. Reviews poured in, some people loved this and hated that, while others had a complete opposite reactions. I found myself worried that I might write my story the wrong way. I had to shove away all of the doubts, fears, and worry to focus on my characters and the story. The story that I wanted to tell, not necessarily the story others thought it should be.


*   Yes, and there is no doubt that the series thus far has an individuality and an 'independence' that really shines through. I take your point about keeping the momentum up in continuing the writing journey and the pressures that can befall authors in maintaining a steady workflow. It's not an easy thing to do and we as authors can't be forced by the weight of expectation to produce.  In evolving both the story, the protagonist Ree McKenna, and her enemies and friends, what did you learn about them in penning "Mortal Defiance".


Well, Ree had a lot of growing up to do in Mortal Defiance, and I was looking forward to sharing her journey. So, I set aside my worries and doubts, and worked on unfolding the story. In the first novel, Ree and her friends are thrust into a situation where they have little control. Their actions and thoughts are in response to things happening to them. In book two, they’ve had some time to absorb what has happened and to try to wrap their minds around who and what they are expected to be. Ree must learn to trust her instincts, to stand up for herself, and to take control of her destiny. Let’s be honest, that is a lot for someone to process (especially at seventeen—not to say that teens aren’t faced with very serious dilemmas all the time), and it doesn’t go smoothly. When does life ever go smoothly?


*   Ha-hah indeed! Life as mortals here the real world is complicated enough without the additional burdens of adolescence and world crushing beings from the nether-world, aren't there. Do you think the Dark Ones ever had to wait on a line for a Starbucks? (At this point Nichole fixes me with a puzzled frown and we sip our wine in a momentary awkward silence). I'm kidding of course.


Now in penning Mortal Defiance, there is certainly a raising of the stakes that no doubt required a certain approach to the development of the work. Did your writing process differ at all from the first book "Mortal Obligation" and, if so, what drove your process.


Much of the process came from me in writing the books. When I look at their situation, I ask myself questions. What would it feel like to have all of this responsibility dumped on my shoulders? What would have to happen for me to come to terms with the situation, to accept the things that are being demanded of me? Big things would have to happen. And in Mortal Defiance, some very big things happen. Hopefully, these things help shape Ree and her friends into the individuals they need to be in order to win the battle. Hopefully they will all survive to find their own happily ever afters.


*   Well, Nichole I have must again congratulate you on "Mortal Defiance" and I wish you all the best for the final instalment. It's been a pleasure talking with you again.


There you have it - "Mortal Defiance" Book 2 in the Dark Betrayal trilogy is available now by following the links from Nichole's own website. Be sure to visit Nichole over there and secure a copy today and while you're at it, catch yourself up with the series if you haven't already buy reading "Mortal Obligation".


So - Kindle-up people! You won't be disappointed.


DFA.
Posted by DeanfromAustralia at 8:02 PM