Gifts Of The Peramangk - WIP Preview No. 4.

I've entered 2012 with a substantial amount of work under my belt on my new project 'Gifts Of The Peramangk' and, though it is well advanced, it is far from complete. I wish I could give you a more definite time frame as to when it will be finished, but I am doing as best I can given the crazy life I have.

In this, my fourth  work in progress preview, I am introducing - for the first time - the character of Ruby Delfey, who is the modern day protagonist of second novel "Gifts Of The Peramangk" and the grand daughter of Virginia Crammond - who I've featured in my previous WIP previews.

Ruby is an eight year old Aboriginal girl, who lives in abject poverty in Adelaide's Northern Suburbs with her grandmother, her Aunt and Uncle and their three children Jeremy, Asher and Minty. She lives under the cloud of domestic violence, crushing poverty and ingrained racism. But Ruby's gift - passed on to her from her grandmother Virginia - has just been discovered by an elderly but formidable Professor of music. He is not yet convinced of Ruby's prodigious talent but, in the following piece, he challenges her with a piece of music she has never encountered before. What follows is major turning point in the story that will bring two worlds together - the ramifications of which will either give Ruby the opportunity to shine or crush her gift forever.

This piece came to me almost by accident, when I was trying to come up with a new way of portraying music in a literary sense. It was difficult because, whereas before - in Hambledown - I'd developed a method of visualizing the music of the guitar and translating that onto the page. I have some familiarity with the instrument. The violin on the other hand, is a much different proposition entirely. I wasn't  as familiar with it's sound, the way it is meant to be played. So, I had to take a slightly different approach.

The result is an impassioned visual, which has a particular significance for one of the central characters - which will be borne out as the story progresses.

Again, this is raw, unpolished and probably grammatically incorrect. But this comes from my soul. I would love to get your feedback...

Reading the composition before her, Ruby began to hear their music in her mind. She saw within the notes on the page, a stark emotion underlying them - a darkness that unnerved her and intrigued her simultaneously. Her uncanny ability - that which had been drawn from her by her grandmother - switched on like a light bulb and she closed her eyes. She breathed softly.

Ruby positioned herself as Khalili had shown her just a few minutes before and she raised the violin to her chin.

She drew her bow across the strings as lightly as a feather, eliciting a long and plaintive note with just enough quiver on it to give it a satisfying vibrato. She knew she had attained the note perfectly. A familiar feeling, akin to a buzz, rippled in her temples and slowly she opened her eyes.

In her mind's eye, the darkness and the dank cold of a cramped bunk house coalesced, filled with the sad faces of people. They were huddled together for warmth around a pair of candles that were seated in the middle of the room. They were prisoners in the bunk house. A large and heavy steel door at one end of the building was fastened shut. In the flickering light that played upon their anguished features, Ruby could see them clearly. Their sunken eyes. Their prominent cheek bones. Their lips, chapped and cracked from the cold. Their faces pocked with sores. All of them - Men, women and children - coughed and spluttered under the weight of chronic illness. They wore tattered clothing over emaciated frames. Ruby played their circumstance upon her violin. 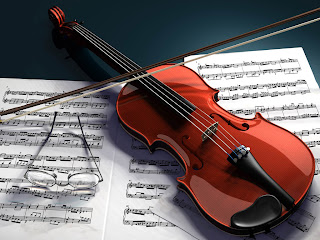 Creeping tendrils of fear weaved their way through the group as they sat on the earthen floor, each of them afraid to move, afraid to speak. Outside the brick walls of the bunk house, guttural sounds, inhuman sounds swirled all around, taunting them. The sounds of machinery, of belching smoke and fire melded with anguished human voices - voices that cried out in fear and pain. Ruby's violin traversed the huddle of people, translating these sounds with a chaotic progression of notes on the violin, signifying a chilling representation of dread. That sense of dread germinated in the pit of her stomach as she played which, in turn fed through her fingers onto the strings. The piece returned to those poor souls trapped in the bunk house and Ruby descended into ominous plucking of low notes. Something was happening that changed the dynamic of the piece. Ruby was heralding the arrival of a foreboding presence somewhere nearby - a presence that was coming.

Several in the group began crying, weeping; their tear filled eyes were filled with long suffering fear - as though they had been crying for all of their lives. Ruby played long, lingering high notes, suggestive of their grief, suggestive of their wearied panic before she plunged back down into the lower registers again as the unseen presence outside grew closer and more threatening. It amplified their fear, causing many of them to scramble backwards across the floor to the corner of the room that was farthest from the direction of presence.

The room was suddenly rocked by powerful explosion which seemed to strike just outside the bunk house. Like an earthquake, the explosion caused the entire bunk house to shake. The flickering light from the candle flame threatened to extinguish. The panic that surged through everyone was all consuming. They were paralysed where they sat or stood.

A second explosion, even louder and closer than the first struck with a deafening boom, causing the brick wall at one end of the bunk house to visibly move and shake. Mortar dust collapsed from the spaces between the brick work. The prisoners huddled closer. Ruby translated their terror with rapid, punctuated strokes of her bow across the violin's bridge. 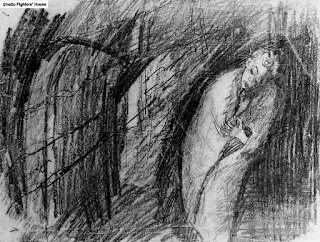 And then, from the centre of the huddle, a lone figure stands. A child, a boy wearing a moth eaten woollen pull over and tattered shorts, steps forth and peers through the darkness towards the precarious brickwork. Men, women and children gasp in horror and desperately try to coax him back to the safety of the group, but he ignores them. Something has piqued his curiosity. He shuffles cautiously across the earthen floor on shoeless feet, that are hardened and calloused.

A third explosion rocks the bunk house with such force that the brick wall and part of the roof crumbles and collapses inward with a cacophony of noise and dust and iron. A gaping hole is revealed through which, the boy gazed up onto a night sky that was ablaze with fire.

A monstrous shadow falls across the gaping maw of the ruined building. It's form is suggestive of a beast like figure with huge hands and a powerful jaw, but there is no physical accompaniment to it. It exists - wraith-like in the darkness. Two great limbs plant their extremities upon the ragged edges of the hole and the presence glares down into the bunk house. The boy stands solitary, returning the glare of the presence with an innocent curiosity. He has no fear, despite the violence that rages all around.

And with that innocence, the boy reaches up with an outstretched hand towards the presence and he smiles warmly.

There is surprise. There is confusion. There is hesitation.

The presence reaches down into the ruined building and takes the boy's hand gently in it's own. All at once, the violence, the chaos and the terror fall away. The screams subside. The machinery throttles down to a low thrum. Ruby's own strokes slow as she holds several high notes with a delicate hand.

His hand still entwined in that of the presence's, the boy gingerly steps forward and over the pile of ruined bricks, lead by the shadow, out and away from the bunk house.

The boy turns back to his companions inside, as the burning sky begins to break overhead. The presence too, has dissipated with the violence and, with a warm glow of dawn playing across the boy's dirty face, he smiles, urging them to follow him.

Through the gap they file. Slowly. Hesitantly. None of them are sure of what to expect. But, as a dawning sun rises to meet them, they step out of the bunk house. Each and every one of the prisoners are touched by a comforting warmth that splashes across their faces. A light that has eluded them for what seems like a life time.

The concentration camp crumbles all around them. Buildings collapse inwards. Other gaunt, emaciated prisoners file out of similar structures.

The boy leads the way towards a brilliant green meadow, beyond a ruined barbed wire fence. Wild flowers bloom into life as the prisoners cross over from the coarse, grey stone of the prison to the soft, lush pasture of the field beyond.

Some fall to their knees in gratitude of the splendour to which they have been delivered. Others just stand, unsure of what to make of their circumstance now. But in time, they look around at each other and, slowly, they greet each other with beatific smiles.

In the centre of the meadow, stands the boy, free of the shackles that has been his bondage. His eyes meet those of an elderly woman who kneels on the ground nearby, unable to support her own frame. In that moment, her eyes are as vibrant and alive as his very own.

In that final moment, Ruby drew the bow away from the violin, allowing the last note to trail away. Then she lowered her instrument and gingerly looked up at Khalili. She was surprised to find him sitting there, his eyes redenned with evidence of tears having stained them.

Ruby shifted uncomfortably in her chair and fidgeted with her violin.

"W...was that okay?" she asked hesitantly.

Khalili nodded slowly and gestured silently to the auditorium behind Ruby.

Slowly, she turned to see a number of people who'd been watching her. They appeared visibly moved. Some of them, like Khalili himself, were wiping away tears.

Gifts Of The Peramangk is copyright © 2011 Dean Mayes & Hambledown Road Imprints.
Posted by DeanfromAustralia at 4:57 PM