Twice in the past 10 days, I have had two similar and disturbing dreams wherein, in both cases I miss a flight that is apparently an important one.

The first dream has me racing through traffic - in my father's utility vehicle - in a desperate attempt to get to the airport and I am panicky the whole way because I am running late and I fear that I will miss the flight. There is a sense of dire inevitability about it. I get to the airport and I am running through the terminal searching desperately for my gate. It is then that I hear a scream. I turn around in time to see a small figure, a child, falling from a mezzanine level above me and hit the floor a few feet away. I rush to the child's aid and desperately try to lend aid to it. It is an Indian child, maybe two or three years old.

As a crowd mills about I call out for someone to call an ambulance. A couple emerge from the crowd - I think it's the child's parents but I am not sure. I look into the eyes of the father and right away, a chill passes through me. I suspect right away that the child has not fallen from the mezzanine. Rather, he/she has been pitched or pushed. Paramedics arrive and I urge them to take over as the panic of my previous feelings of dread about missing my flight begin to take over once more. This time however an airline representative assists me by leading me to the departure gate. However the hallway is like a maze. We cannot find our way, my panic escalates. The corridor twists and turns on itself - it is so maddening. Then, finally we make it to a glass door that leads out onto the tarmac... 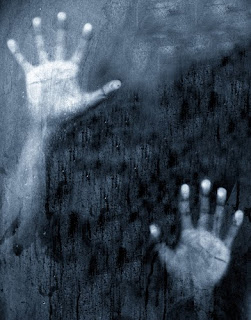 ...just in time to see the plane taxi-ing away from the departure gate. I have missed my flight. I am beside myself and I scream No!! But there is nothing I can do. The airline staffer is gone and I am alone, watching the plane disappear from view.

I wake up at that point and I was disturbed for a long time after-wards.

The second dream has me trying to catch a transit bus from some kind of hotel or lodge where there are a lot of athletes about...it's some kind of tournament but I am not participating in it. I have to bluff my way onto a mini bus that is taking people to the airport. I am in a similar state of rising panic - I have to get to my flight and once again, the clock is against me. There is delay after delay as the bus stops to pick up more passengers on route but before too long, I can see the airport up ahead and, for a brief moment I feel a flicker of relief.

However the bus eventually stops in a field some few kilometers from where I have to go and the driver declares that this is as far as he can take me. I have to walk the rest of the way. A series of foot bridges that weave and curve like spaghetti lay between me and the terminal in the distance. Panic returns and I grab my bag and run as fast as I can towards the terminal. I fight against an insane amount of human traffic that have seemingly flooded onto the foot bridge that I am on. 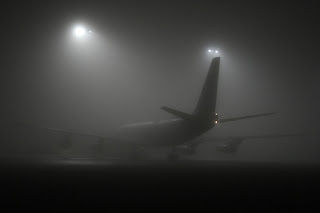 Suddenly, from behind me I hear the sounds of whistles being blown shrilly and I turn to see a group of security guards - again these people are Indian - running towards me, pointing at me. They bail me up and issue me with a fine for running on the foot bridge. They then demand to see the contents of my bag but I refuse, telling them that I am going to miss my flight. I lurch away from them and they begin to pursue me but then they disappear into the crowd and again I am hopelessly lost on the foot bridge, unsure of which way to go.

The dream becomes fractured at this point and I can't remember specifically what happens next but I can remember being in a shopping precinct looking for a public phone. And I remember that same feeling of dread that lingered within me long after I shook myself from the dream and lay awake disturbed by the imagery.

They were two separate dreams, dealing with identical states of mind and they both dealt with my struggle to get to a flight that I ultimately missed. I woke from both of them feeling disturbed for a long time afterward. I have spent the past few days trying to comprehend their meaning but until now I have drawn a blank.

My subconscious mind scares the shit out of me sometimes.

DFA.
Posted by DeanfromAustralia at 11:51 AM

Email ThisBlogThis!Share to TwitterShare to FacebookShare to Pinterest
Labels: Dean from Australia, Dean Mayes, dreams and their meaning, Self Reflection