Nestled in the rolling green hills of the Latrobe Valley in Victoria, Australia lies a great big hole in the ground.

It's an open cut mine that, for the better part of a century, has been the source of Australia's largest deposits of brown coal.

This brown coal has been dug up by massive dredges and fed into boilers at the nearby Yallourn Power Station. The electricity from this particular station powers a lot of homes in Victoria and eastern Australia.

It's a dirty job but somebody's gotta do it.

During the halcyon days of the Victorian power industry, a town was conceived and built near the Power Station. The Yallourn township was provided to the workers that toiled in the massive open cut mine and station. It was a fully realized town even before it was built and boasted facilities that were the envy of the district. Beautiful tree lined streets, comfortable housing, a fully functioning shopping precinct, a hospital, school, police station, pub. Yallourn had it all. And for decades it was a bustling hamlet. It truly was a beautiful town. However there was always this catch...

The town was built on the proviso that one day, the State Electricity Commission (SEC), might need to access the rich coal seam that lay underneath it. And that day did come. In the mid 1960's there was a revolt by the towns folk against the SEC and for years they protested against their town being dismantled at the whim of some faceless bureaucrats. Money was raised, campaigns were hatched, people joined in to fight for their township.

When I was born into this battle in the mid 1970's, it was already a given that the man had won against the workers. There was a hell of a lot of life in the old girl even though she was a dame in decline. 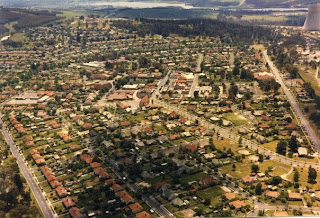 Yallourn's facilities were the gold standard. In particular, the cinema - or 'theater' as it was lovingly referred to - remains in my mind the grandest of Yallourn's architecture.

Built in the 1930's and overlooking the township's central gardens, the Theater was a vibrant social center. Featuring two screens, red leather seating, a plush foyer and concession stand, the theater put on some of the greatest movies of the 20th century beginning with "Gone With The Wind" in 1939 (and, as a nice bookend to it's life, it screened the same film in 1979).

I've shared memories with ex-Yallourn residents as to what films they saw over the years and they are recalled with affection.

I remember my Dad and his next door neighbor Rob Martin recalling how they ran home in the night after seeing the 1973 stunner "The Exorcist" - so shit scared were they. 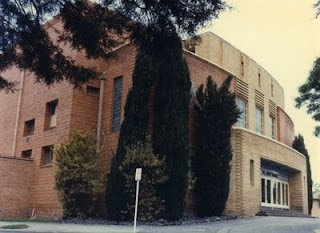 For me, I had the pleasure and privilege of seeing one movie there. It was only one but it was to have a profound effect on me.

I can still remember the very first time I saw Star Wars.

There are certain events in a father's life that fall into the category of things you must do. Taking your son to his first movie experience is one. Towards the end of 1977, my Dad took me to the Yallourn Theater to see the George Lucas blockbuster.

By the end of 1977, Star Wars had become a world wide phenomenon and on a balmy November evening Dad and I went along to see what all the fuss was about.

I'm sure I didn't actually grasp what a movie actually was. The whole thing was just one big WOW! moment - as in 'I don't know what I'm actually doing right now - but WOW! Just WOW! 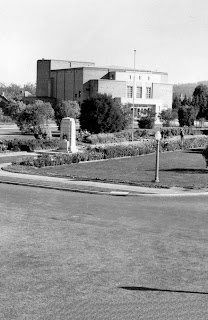 Dad's cinematic tastes are quite varied, although in the years since Star Wars he hasn't totally connected with the space fantasy/sci-fi genre in the way that I have. Dad was schooled in the classic political thrillers like "Three Days of The Condor", "The Marathon Man", "The Conversation" - all films that I like very much. But Star Wars was different for him in that, even he could appreciate it was an 'event film'. Everyone was talking about it - even the rough and tough coal miners and power station workers. There was something about Star Wars that crossed boundaries. It was accessible to everyone.

My memories of that first viewing are clear but fractured, fleeting vignettes of movement, color and place, though there are three distinct memories that stand out. First and foremost was the foyer of the cinema. It's lighting was soft but I can remember the old school flashing Hollywood styled lights in the concession area. The carpet in that foyer was deep red, very plush, the kind you could sink up to your knees in. I'm going to take a punt here and say that I had my first taste of popcorn. And I think Dad was a choc top fan - spearmint - but I'll have to confirm that.

The cinema itself. Well - that was simply the most amazingly awesome room I had ever been in. Vast and cavernous and the screen - oh my god - that screen!! I was gobsmacked by it. The seats were dark red - very plush material, the kind that were really low set and you kinda disappeared into them. 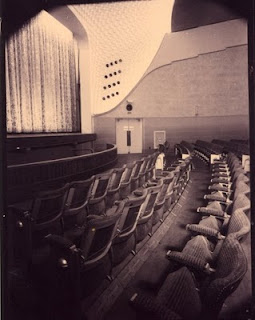 And then there was the film. What can a 35 year old man channeling a (nearly) 4 year old say 32 years after the fact?

The ubiquitous Star Wars logo erupting onto the screen against the twinkling star field. That opening crawl - though I couldn't read it then. And of course, there is that Star Destroyer passing overhead. I can clearly remember that. I was jumping up and down in my seat - blown away at this brilliant piece of celluloid - one of the most kick arse cinema moments of all time!

Things that  make you go - WHOOOOOO!!!

The first appearance of Darth Vader when he boards the crippled blockade runner. The odd-bod Jawas and their towering Sandcrawler, the planet sized Death Star. All of these moments passed into my consciousness and have never left.

There are other significant memories. Scenes that I swear I saw in that original release that I haven't seen in any other since. One example is a scene just after Ben Kenobi appears, having scared the Sand People away from a subdued Luke Skywalker. Kenobi and Skywalker have a conversation about Artoo then Luke is reminded that C-3PO still lies at the bottom of the ravine - the "Where am I? I must have taken a bad step" scene.

Obi Wan and Luke are then seen helping 3PO to his feet. Now, I always remember seeing Obi Wan, Luke and 3PO standing and stepping down from where he has fallen in the film. However I have only ever seen that moment as a still since. I stand to be corrected but, I definitely remember a much longer scene of 3PO, Ben and Luke standing together just after they help the stricken droid to his feet.

In all versions I have seen since, there is a wipe transition that crawls up the screen as they lift 3PO to his feet - a transition used to hide the fact the the film makers were using just a torso of 3PO at that point - before the scene shifts to Ben Kenobi's dwelling.

The last scene that I can recall with clarity was the Millennium Falcon knifing through space, just after they escape from the Death Star. It was brief moment of visual pleasure just watching that beautiful "piece of junk" in full flight before the four TIE fighters rocket in after them while Luke and Han blast their pursuers away with the Falcon's quad canons. 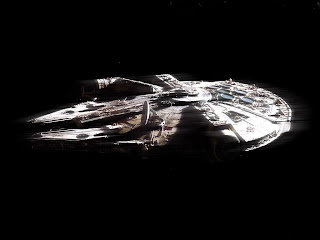 For me, there was only one 'Falcon'.

Dad tells me often that I wouldn't shut up through large chunks of the movie. I was babbling away excitedly. I guess it was the excitement of my first movie experience. I went on to live and breathe Star Wars throughout most of my youth and adolescence - taking a break from it during those dark years between '86 and '95 - and now as a supposedly responsible adult, I can happily declare that I'm still the biggest kid on the block - with the coolest Star Wars collection going around.

Yallourn's destruction was inevitable. By the early 1970's the SEC had begun the process of dismantling the town, moving houses out on trucks in pieces so that they could be rebuilt elsewhere. The lure of the rich brown coal seam underneath the town ship was just too overpowering. The irony of that is that today the State Electricity Commission itself is now extinct - having passed into private/foreign hands in the mid 90's by a government hell bent on privatizing anything it could get it's hands on.

You can still find many examples of Yallourn's architecture in existence today around the Latrobe Valley. By the mid 1970's Yallourn early spirit had been routed. Though many held out, continuing to live and work there, the writing was on the wall. My family had moved by late '77 to the nearby township of Yallourn North.

Today, though the vista of the township is gone, I have discovered that the land upon which my first house was situated is actually still there - it hasn't been swallowed by the Cut. In places evidence of the town's streets still exist, complete with lines of trees. 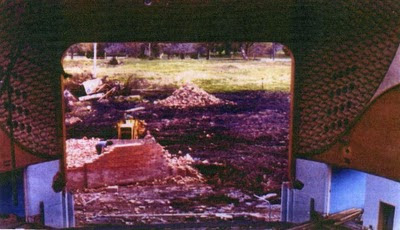 The screen that opened the door onto that galaxy far, far away is bulldozed.

Following the final film presentation  - Gone With The Wind - the cinema was demolished in 1979. A 40 year old cinematic era was ground to dust. The Yallourn Theater lives on in a comprehensive collection of stories, photographs and images that are shared by former residents of Yallourn among whom I count myself. I cherish that first movie experience with my father. Because in a small way it influenced the person who I am today. I love story telling, I love the escapism of cinema and I love the toys! I can't allow myself to give up on them, as much as my serioso would like me to I am sure. Fortunately, my love of all things Star Wars lives on...and my son is now getting in the action too.

My serioso doesn't really approve but - to quote the character of Chaz Bottler in Kyle Newman's 2008 love letter to Star Wars fans (aka Fanboys)...

DFA.
Posted by DeanfromAustralia at 1:21 PM