When putting together a list of core characters or refining a set of characters, it becomes important to remind yourself that each character must serve the story in some way. There has to be a reason for them being there otherwise they are not making any useful contribution to the story nor are they influencing the other characters in any meaningful way. Redundant characters can really bog the story down.

The character of Samantha Barrett, Andy's colleague from the Pub, was one I had a little difficulty defining initially and for a while she served really only as a peripheral character who was without purpose. It really maddened me though because I knew I wanted Sam in the story and I knew that I wanted her to serve the story in a meaningful way - I just couldn't get a handle on her. Hell, I couldn't even visualize her in the beginning.

It's funny then, when chance friendships with people turn into something wonderful. A good friend of mine and I were chatting online one rainy afternoon when I was stuck indoors and I think she must have been showing me some happy snaps from a recent trip. As I was browsing the pictures it suddenly hit me - this vivacious young woman, who is quite bohemian and soulful - is the perfect Sam. From the hint of a Southern twang (something I had decided on before I cracked the nut) to the whimsical outlook on life - everything that I needed to imbue a sense of being into Samantha was right there in my friend Jessica Pohlner. And so the basis for Sam became a reality and everyhing flowed from there.

Samantha is the bright spot in the dark and smoky bar where she and Andy both work. She is outgoing, is good at her job and, despite Andy's destructive nature when first we meet him, Samantha genuinely likes Andy. She senses the conflict within him at the beginning of the story - his revulsion towards the nefarious part of his life - even if Andy himself doesn't.

Samantha is also a devotee of alternative medicine and is studying a course in this field. In itself, the course isn't necessarily significant, however it becomes a key point of distinction - a device if you will - when Andy's change begins and people react to it. Where other reactions are negative, laced with suspicion and doubt, it is Samantha who senses another reason for it and tries to understand it.

Samantha's role as a supportive influence in Andy's life, also as a motivator for him to take his first steps towards fully embracing his gift, is an important one. She has her own motivations for doing so which are revealed subtly throughout the story and it softens some of the darker elements of the Chicago scenes.

I call Jessica Pohlner a friend though I have never actually met her beyond the online sphere. She is a remarkable young woman who has worked diligently over the past few years and who is now working towards a Nursing degree (*thumbs up here*). She is witty*, kinda world weary - even though she's still in her early 20's and she has a sassiness about her that makes for a great character influence. Jessica is also a thinker, a ponderer and it is this quality that I found most appealing because it is what drives Samantha in the story - a need to understand the world around her. 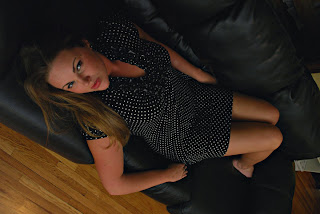 Friend & Witty Woman, Jessica Pohlner - inspiration for the character of Sam in The Hambledown Dream.

Jessica really helped me flesh out the character of Samantha and made her a small but very important part of the story telling in The Hambledown Dream. For that alone, I feel fortunate to know her but Jessica is a wonderful person who I am sure will go far in life.

Posted by DeanfromAustralia at 4:41 AM