When I was a kid, I used to sweep the hair in my Dad's Barber shop. I have always equated Dad's Barber shop, in the Gippsland town of Moe, with the bar from "Cheers". Dad used to advertise it as "three chairs, no waiting" and it was the kind of place where "everybody knows your name." I have many fond memories of that Barber shop as a place of rich conversation, friendship and it was a place, through which I learned a lot about the world outside my small town confines. I learned about places and people, their vocations, the lives they led, the dreams they had.

I also learned a lot about history.

One particular day, when I was maybe eight or nine years old, an elderly gentleman - a regular - came in for his regular tidy up. Despite his thinning, silvery hair, he always requested the same - a short back and sides, and a shave. Dad's work with the cut throat razor was quite a thing to see. It is a skill that you don't often see anymore, so to watch one do it with the skill of my father - it is artistry.

Anyway, this regular. He was an impish fellow, always well dressed and he had a sparkle in his eye, as though he had a deep appreciation of the world. He was always happy. I remember he had an accent. It was lyrical - not in the manner of the Irish or Scottish or even Welsh accents, which were the ones I'd heard the most as a boy in the early 80's. It sounded very much like the accent of our then next door neighbours, Tina and Rudy, who displayed lots of crockery and dinnerware with windmills on them in their home. I was to learn that this man was from Holland.

For pocket money back in those days, I would man the broom in the Barber shop and sweep up the hair that would fall to the foor as my father clicked his scissors against the comb. Too much hair around the base of the barber's chair was hazardous, so I always swept with a sense of urgency, making sure the linoleum floor was clear (it should be said that an 8 or 9 year old boy armed with a broom and sweeping furiously while a barber is trying to work is just as much a hazard. But I was nothing if not task oriented).

I happened to be sweeping by my Dad's leather and chrome Barber's chair as the eldrely Dutchman sat down. Having stowed his coat and hat on a hook near the waiting chair, he'd dropped into the seat, settled back with a satisfied sigh, glad to be off his feet for a little while and he rolled up his shirt sleeves. As my Dad turned and flicked a barber's cape with the flourish of a matador, I noticed a simple tattoo on the elderly gentleman's forearm. Though it was but a moment, I immediately recognized a series of numbers.

The gentleman saw my moment of pause and my puzzled expression and he smiled. As the barber's cape floated down and around him, he jutted his arm out from underneath and he showed it to me.

I hadn't been mistaken. I saw a faded series of numbers, etched into the tanned skin of his forearm. 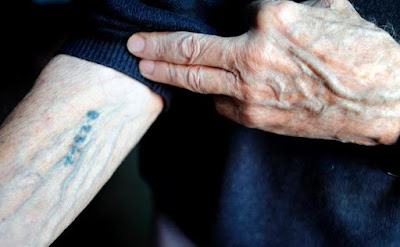 He explained that he was a prisoner of the Germans during World War 2. I knew a little bit about World War 2 from my own grandfather, who served during that terrible conflict. The elderly gentleman before me said that he was held in a camp in Holland, before being transferred to a place called Auschwitz. I had never heard of that place before. He told me many people were taken there and were given a tattoo, just like the one he had. He told me that it was a dark place and many people had died there, but he had been rescued.

That was the first time I'd ever heard about Auschwitz, the Holocaust or the Jewish people. I sensed, even then, that I been told something important. The encounter with this man has stayed with me. It was such a fleeting moment, but from that, I explored the Second World War in depth and, in particular, the Jewish experience.

It was around this time, that I turned my attention to writing. In a grade three creative writing class, I wrote a short piece about a war experience from a soldier's perspective. I can't be sure if that occurred around the same time as my encounter with the elderly Holocaust survivor...but I like to think that it did.

Moments of deep learning come from places and people you might least expect. This was but one of many lessons I took from my Dad's barber shop.

DFA.
Posted by DeanfromAustralia at 6:42 PM