The Chump Who Laughed Me.

In a corner of northern Chicago stands a noble looking, red brick building that, for decades, has served as a lively entertainment focal point and breeding ground for some of the finest up and coming entertainers.

Beginning life as a movie house in 1914, The Lakeshore Theater has no doubt laid down some serious celluloid miles through its projectors, showing many of the classic movies of all time. It did so until as recently as 2000, after which it transitioned to a live entertainment venue, hosting musical acts, comedy and arthouse theater that drew audiences from all walks of life. It was referred to affectionately as simply 'The Lakeshore' and anyone who wanted to tread its boards could do so. Importantly, the Lakeshore was known for enthusiastically supporting new talent.

Sadly, due to the rising costs associated with maintaining this grand old dame and, I guess, the financial hardships brought about by the severe economic downturn in the United States, The Lakeshore was forced to close its doors in 2010. A vibrant era of live entertainment came to an end and, I have to say, it's a frigging tragedy. 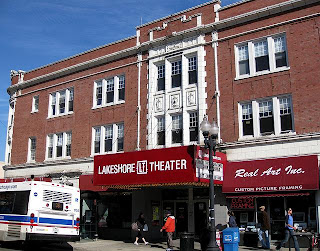 During it's rambunctious life, The Lakeshore has hosted names that - to many of you - may not sound immediately familiar. They are an eclectic mix of extremely talented individuals who I have followed for several years, due in part to my affection for anything Chicago. Mike Bridenstine, Pat Bryce, Rene Gauthier, Brady Novak, Bill Cruz, T.J. Miller, Hannibal Burress, Dean Carlson, James Fritz, Joe Killgallon. To my mind, these artists in particular represent my generation of comedic talent and they speak to my bent sense of humor. All of of them are blisteringly funny guys who are articulate, excellent speakers and they have, unwittingly, crafted a kind of post-9/11 observation of the world around them that laments our collective loss of innocence, remembers with affection, the simpler times of their 80's youth and observes with suitable caustic vigor, the dysfunction of our modern, pop culture addicted, celebrity obsessed, really fucking hard society in such a way that we cannot help but laugh at the ridiculousness of it all.

Last week, I received in my mail box, a package that I have been eagerly awaiting since before Christmas (such is the turn around time for our respective postal services). I knew from the minute I spotted the Chicago postmark, what it was.


I have spoken about Detroit native/turned Chi-town local Mike Stanley before. He served as the inspiration (in physical form anyway) for Beck, one of the characters in my novel "The Hambledown Dream" and I discussed his inspiration in this piece. Mike Stanley is typical among the group of insanely talented individuals I mentioned above. Mike Stanley is a commanding physical presence and a bloody handsome bastard. I mean that in a totally heterosexual, blokey way - just to be clear. In conversing with a number of female fans it is not hard to see why he appeals to women. He is tall and broad across the shoulders but moves across the stage with an almost balleretic lightness (did I just make up a word??). He prefers to keep his head perfectly shaved - out of necessity, he says - given that his receding hair line has kinda gotten away from him in recent times. The physical package is completed by a perfectly chiselled jaw line that could have been hewn from marble.

But last and certainly not least, Mike Stanley has been blessed by a voice that is truly something to behold. Deep and melodious, Stanley's vocal style has the baritone of, say, a James Earl Jones mixed with a hint of the graveliness of a Bruce Springstein and it is finished beautifully by Stanley's ability to lift it with an enthusiasm of, I dunno - a Bill Cosby at full tilt - maybe?? More than that, though, is the skill at which Stanley is able to navigate his way around the English language. His public speaking chops are actually a joy to listen to - the clarity and elocution are divine. Never have I enjoyed someone drop the F-bomb quite like Mike Stanley. 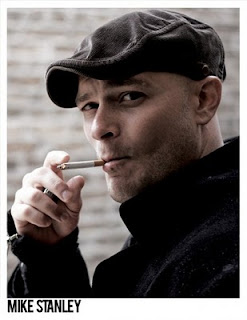 The genesis of Stanley's "Tough Luck Chump" can be traced back to the initial performance of the set that has now immortalized on the disc. Recorded on July 27th 2009 at The Lakeshore to a sellout crowd, Mike's performance was supposed to have been committed to DVD a lot sooner than it actually was. I consider myself kinda privileged to be privy to some behind the scenes controversies involving the original production of the DVD but I won't say anything more than that out of respect for Mike. Suffice to say that I'm glad that original production didn't go ahead because the resulting product is a far superior package.

The show itself is top shelf - 45 minute set in which Mike takes his audience on a journey through subjects as varied as male pattern baldness - including the 'downstairs' variety, father/son relationships - "my father is like a gorilla with table etiquette" muses Mike at one point, jobs and joblessness, driving through Indiana (apparently, it's a pretty white trash desolate jungle out there), moving out of home at 20 only to have to move back in at 30. There are dick jokes - but they are, quite possibly, the classiest dick jokes I have ever heard.

And there is also the social observations that define the line between us X-genners and our Y-gen counterparts. This was, for me, one of the funniest orations of the set - and it was delivered with a lot of heart too. Stanley makes the observation that kids today have cell phones at something like aged 9 and that parents have the means and the paranoia to know where their children are at every single moment of the day. Contrast this with our generation where, during the summer, we were virtually frog marched out of the house at dawn, the doors were locked behind us and our parents didn't want to see us until the first stars were coming up. 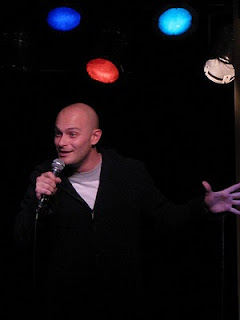 Stanley's delivery is razor sharp, his enthusiasm and onstage presence totally commanding and his passion for near flawless public speaking is a joy to listen to. You can understand every frigging syllable!

What makes "Tough Luck Chump" such a special package is the inclusion of the the feature length documentary "Salty Language Peppered Morals" which chronicles Mike Stanley's journey to Boston during 2008 to compete in the Boston Comedy Festival. This is a real treat for students of stand up comedy, an "alternately serious and silly look a life that most of us will never know" (from the DVD liner notes). It lays bare all the agonies and anxieties, the trials and tribulations of life on the road, where comedy is the gloves and the crowd and it's laughter are the opponent and the prize all in one. A great deal of love went into the making of this doco and it shows. The production is as good, if not better, than any big budget documentary and - as a character study - Mike Stanley makes for a compelling individual. 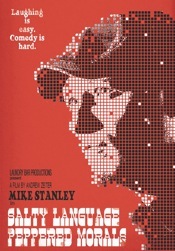 One other thing to note from the DVD is the inclusion of a piece that runs during the end credits for Mike's Lakeshore set. Entitled "Tough Luck Chump" and performed by Mike himself, the piece is a gutsy, electric blues riff that gets you down and dirty and totally into the the tone of the set. I was reminded of Seasick Steve whilst tapping away to it. Blues aficionados will know what I'm talking about.

The DVD comes with a mini poster insert featuring artwork from both "Tough Luck Chump" and "Salty Language Peppered Morals". In and of themselves, they are a nice collectors piece which I plan to frame. You also get a sticker included which is yet another cool keepsake which just adds to the overall package. Purchasers can have their copy signed by Mike himself and, as my own copy will testify, geography is no barrier to getting your hands on a copy. Mike will ship anywhere in the world. 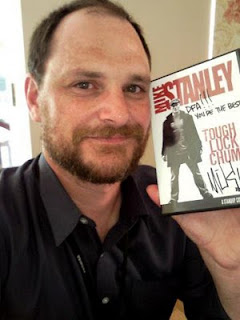 "Tough Luck Chump" represents a kind of stand-up that is unpolished genius - and it should not change. Mike has a hunger for comedy that is deserving of success - great success. As a document "Tough Luck Chump" is one of which Mike and the team who helped bring it together should be very proud. "Tough Luck Chump" can be ordered now from Mike's website http://www.mikestanleycomedy.com

DFA.
Posted by DeanfromAustralia at 8:47 PM