I'm sitting under the pergola, looking out across my back lawn which looks bloody beautiful right now (I mowed it yesterday, so it looks like a bowling green). I'm listening to CBC Radio One out of Vancouver as I write this - they are talking about the future of the internet. What can I say - I'm a global citizen.

The half cup of coffee before me is cold, but I can't be arsed getting up and making myself another yet. By the way, I feel like death warmed up right now (or is that cooled down?) I dunno. I feel like I have the flu - but I think it's more the case that my accumulated stress has caught up with me. In the lead up to Christmas I was working so hard, then I suddenly stopped - had a week off - and 'hit the wall'. I ache all over, I feel as though I've taken some serious punches to my kidney and my right eye is swollen closed. Some kind of infection, though I have no idea what sort. But you don't want to hear about that.

The week away on Kangaroo Island was great. It gave me a chance to rest and relax. Although I think I added about 20 pounds to my ample bosom (???). There was so much food!!! And that was just the food that we disn't catch. My daughter began walking for the first time and I was able to enjoy daily walks down to the lagoon to watch the pelicans. Okay - well she rode on my shoulders for most of those walks - but she is walking. It was my best Christmas present this year. My son and I had tonnes of fun boogey boarding and swimming in the sea. 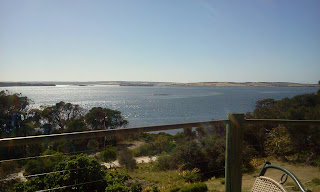 A place to write.

And I made some serious inroads on my new project. I reviewed my progress just this morning and I've hit 20k words. I was surprised because I didn't think I had achieved such a word count. Being able to work on the Island, away from the noise and rush of the City, was so productive and therapeutic. The attached picture shows you the view I had whilst tapping away on my Tablet (oh yeah - btw - I have crossed to the dark side, and it is wonderful). I have already passed some significant milestones that I wanted to achieve and that has been particularly satisfying. I am getting a handle on the feel of story, the environment and the characters. And I have made some discoveries that were influenced by the characters themselves which is really great - it is an indication that they are taking on a life of their own.

So now I'm back. I'm feeling nervous. In the week before Christmas my work as an agency Nurse dried up really suddenly and it caught me unaware, to be honest. Normally, things do quiet down over the holiday period, but for those of us who work night duty - we are usually unaffected. Not so this year. I was getting cancelled for almost every shift I was booked for. I was able to get enough work to bolster my savings for the holiday I had planned but it was a really close call. Now, I'm waiting to see what happens this week. For an agency nurse, when things are good, they are really good but when the command comes down from on high to cut staff - we are the first to get cut. I work for an agency because I crave control over my working life. I want to be around for my family and I have no desire to be enslavened to a rostering system that is often dysfunctional. And of course there is an additional financial incentive to doing agency that cannot be ignored. Mostly, I do it for my children. I get to be around for them. Waiting for the phone call that says you've been cancelled...again...gets old, really quickly.

Hopefully it won't last too much longer. I want to be back in the saddle.

How are you? Did you have a good Christmas? A good holiday? Did you see the new year in happily - with good friends and loved ones?

I hope you did.

(sent from my Galaxy Tablet) :)
Posted by DeanfromAustralia at 5:25 PM