I had this whole other post I was going to write this week...in fact - I've had several posts lined up over the past few weeks but I haven't had the heart or the mind to write them. I've lost the drive for writing just at the moment - something which is depressing me a lot. But other things have taken over which are far and away more important - and saddening right now.

We finally got an answer to the mystery that has been our daughter's crooked neck this past week. Those of you who visit my site regularly may recall a couple of posts I wrote last year when we first began observing a distressing head tilt and generalized stiffness in our infant daughter. The symptoms became all the more alarming when Lucy started having long periods of neck stiffness and visible discomfort that would last for several weeks at a time before abating somewhat. She would enjoy a short period of relative freedom before relapsing into these episodes again.

Over the Christmas period, we began to notice that Lucy's sleep patterns were broken by these terrible seizures that would come out of no-where and cause her to jerk and spasm for long periods of time before settling too. They'd occasionally happen during waking hours but they were much more visible at night. Suffice to say, it's been bloody awful to watch.

Well, after seeing a neurologist in Adelaide, who specializes in children, we came away with a rather distressing diagnosis - benign paroxysmal torticollis of infancy. The disorder is so rare that, in the words of our neurologist, he has seen maybe one case in six years.

This syndrome usually becomes apparent from the age of about six months - right at the time that many infants are beginning to hold their head up on their own. It is characterized by the alarming head tilt which, in itself is problematic because it pulls the musculature of the head and neck out of sync, resulting in associated problems that require physiotherapy to correct. We are told that the reason for this head tilt is because Lucy is experiencing severe migraine headaches - severe enough that they cause her considerable pain and exhaust her easily. Along with these headaches are pallor, sweating and generalized stiffness, poor sleep and in some cases seizures. Treatment for the symptoms is limited and sufferers of it don't readily respond to pain relieving medication, partucularly in the case of the migraines.

Now the real kicker with this syndrome - lets call it BPTI since wanky monikers are often given over for the sake of brevity - is that we can expect Lucy to have to deal with it up until the age of 5 years, after which time it should taper off to nothing and Lucy should be okay.

So in the meantime Lucy has to endure these extended periods of suffering and there isn't a hell of a whole lot we can do to alleviate her pain.

BPTI is one of those syndromes for which not much is known about it. It is part of a family of benign (an oxy-fucking-moron if I ever saw one) neurological disorders in children that have no apparent causative factor and just seem to pick their subjects randomly. Of course, medicos take grwat pains to stress the benign part of the descriptor but when a parent is holding their infant daughter in their arms and she is seizing as though attached to a faulty electrical cable, screaming in pain - there is nothing fucking benign about it. 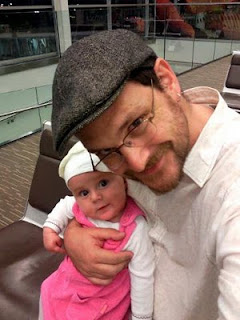 It's not all bad though. Lucy remains a blissfully happy child with a mischevious streak which is becoming apparent - even on her bad days. She is hitting her milestones as we would expect and, although developmental delays are a concern with BPTI, we are hopeful that Lucy will be okay. If anything, it has served to strengthen our resolve to be as attentive to her developmental needs as we can.

In the meantime, we continue to see a physiotherapist who specializes in children and who has a wealth of experience with the singular phenomenon of torticollis (the neck part). By keeping Lucy's neck muscles supple, we're hoping to prevent any lasting damage to her neck. We also intend to explore some alternative treatment modalities which will complement the treatment she has had thus far. Whilst I'm wary of many of these so called therapies, I don't discount for a moment the value of some of the more universally respected Eastern modalities which have proven effective.

I've shed tears - more than a few these past few weeks and I have struggled to absorb the diagnosis with all it's ramifications for the near-term. I'm angry, grief stricken, powerless to intervene or to protect her from the awful pain Lucy goes through each time things get bad.

Encouragement and hope have come from the most unlikely of places.

Whilst conducting a round one evening, last week, on the block at the prison I have been nursing at, I was overcome by emotion and struggled to regain my composure for fear of being laid bare in front of the "guests". As I was tending to a fairly notorious character, giving out his medications and checking his charts, he rather uncharacteristically patted my arm and said quietly, even knowingly "Everything will be okay son". Our eyes met and for the briefest of moments, I saw in his compassion and hope - commodities that in a place like that, are uncharacteristic gems.

So the Tortoise Collar has been discovered. We hold it reluctantly.

Posted by DeanfromAustralia at 6:01 AM