"Dream" People - Inspirations For The Characters In The Hambledown Dream (Part 6 - Sonya Llewellyn).

As a writer who has attempted writing a novel more than once, I have amassed a healthy amount of notes encompassing ideas, situations and characters over the past few years. And it turned out to be a good thing because, when I began writing The Hambledown Dream, I found myself returning to these boxes and folders of notes to review the things I had worked on before to see if they could be incorporated into the novel.

This was certainly the case with characters.

Several of the characters in The Hambledown Dream were drawn from a previous work that remains incomplete at this time. I deliberated for a while, whether to bring them across to this novel because I haven't yet ruled out the possibility of resurrecting that other project in the future. But I developed such an affection for them then that, eventually, I couldn't resist the pull to populate The Hambledown Dream with them.

Sonya Llewellyn is one of those characters.

Sonya is a young lawyer who is in love with Denny Banister, the tragic hero we first meet at the beginning of The Hambledown Dream. They are childhood sweethearts, having known one another since they were children. Together, Sonya and Denny have dreams of a life together which include marriage, children and renovating their old beach house, just outside the sleepy seaside village of Hambledown in southern Australia. In a single moment, those dreams are shattered when Denny is diagnosed with inoperable cancer.

The illness overwhelms him so quickly that neither of them can comprehend the terrible ramifications.

In the aftermath of Denny's death Sonya is left stunned - so much so that she is unable, or perhaps unwilling, to grieve. So sudden is his death. It hardens Sonya so much that she withdraws somewhat from the world and begins to put together their shattered dreams alone. She starts by pouring herself into resurrecting her grand father's failed law practice in Hambledown while spending every spare moment working on the old beach house. Her only companion is Simon, Denny's cross breed cattle dog pup who he rescued from a farmer's unwanted litter.

Sonya refuses to allow herself to grieve, to let herself shed her tears because she can't quite believe that Denny has gone. By shielding herself from everyone - except in a professional capacity, Sonya is able to protect herself from a looming emotional chasm which she is constantly drawn towards. Privately, she fears that if she allows herself to fall apart she may never recover.

Both Lionel and Ruth Broadbent are perhaps her closest friends. She values their friendship keenly, even though she baulks at their gentle "encouragement" to get out there once again and live life.

As events progress in The Hambledown Dream, Sonya will arrive at her own critical juncture where she will have to face her grief - however Sonya's world will also be rocked to it's foundations when she discovers that all is not as it seems.

In refining the character of Sonya I visualized a young woman of a particular beauty and intelligence who possesses strength and resolve as well as a femininity and grace that - basically - I could easily fall in love with.

And she had to have auburn hair.

Australian actress Rose Byrne is, in my mind, one of the most beautiful women on the planet and she represents the perfect physical personification of Sonya Llewellyn. Rose Byrne, through her performances in the TV series "Damages" to movies such as the romantic comedy "Adam" and the apocalyptic "Knowing" in which she co-starred with Nicholas Cage, has imbued her performances with an old school beauty, femininity and a gritty intelligence which I imbued Sonya with. Byrne plays her characters so well and, to me, she is "the" perfect fit for Sonya. 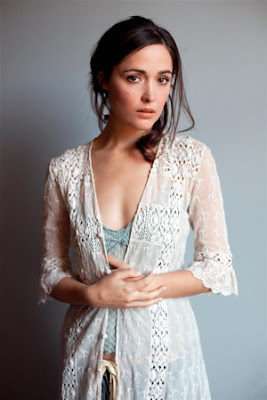 Australian actress Rose Byrne, the inspiration for Sonya Llewellyn in The Hambledown Dream.
I spent a lot of time getting my head around Sonya Llewellyn's journey in The Hambledown Dream. At first it wasn't as clear to me as it eventually became but I really enjoyed the discoveries that I made about her in the course of writing the novel. Her story is a very personal one - it's a familiar struggle, dealing with the grief of losing the love of your life.

Sonya's journey is based loosely on the experience of my paternal grandmother who lost her husband to cancer after 48 years of marriage. They were very much love and - similarly to Sonya - my Nana did not grieve outwardly for a long time afterwards. Privately, however, she battled with her grief until she could contain it no longer.

I hold a very big candle for Sonya Llewellyn.

Posted by DeanfromAustralia at 11:42 AM