Anxiety At The Edge.

There has been a disturbing turn in a direction with my health - one that seems inconceivable to me after the past two years of multiple surgeries on my throat.

I was in a place towards the end of last year, where it seemed as though we had found a solution to the choking problems I was experiencing. I had begun receiving a series of injections of botulinum toxin - (yeah that botulinum toxin) - in an effort to paralyze a dysfunctional region of my throat that was randomly going into spasm during the act of speech and swallowing.

After what was a hopeful response, I've had a major setback. My dysfunctional throat, which seems determined to kill me, is not responding to the treatment. To be specific, the injections were designed to paralyze a ring of muscle at the top of my throat - just under the vocal cords - called the cricopharyngeal ring. 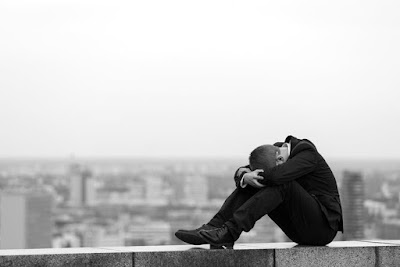 In its normal state, that ring of muscle is supposed to relax and contract rhythmically with the act of swallowing, allowing food to pass safely into the oesophagus. During speech, it is supposed to contract and stay contracted in order to facilitate airflow over the vocal cords.

In me, the cricopharyngeal ring spasms uncontrollably during swallowing and speaking, leaving me at risk of food and liquid regurgitating into my airway and lungs. Food and fluid on the lungs is not a good thing.

Basically - you can drown. And I have come close a few times.

This all relates back to the dysfunctional nerve supply in my neck that precipitated the surgery I had on my vocal cords in 2016 and 2017. Initially, we believed that only my vocal cords were affected. It turns out the pharynx is involved as well.

I can't believe I'm saying this - much less typing it - but I'm going back into hospital for more surgery.

The only credible path for me to take now is to undergo a procedure in which the cricopharyngeal ring, along with part of the pharynx, will be cut in order to neutralize the muscle completely and permanently. By severing the muscle it will be rendered useless and will prevent the pharynx from going into spasm during the act of swallowing and speech. It will also widen the pharynx at the top of my oesophagus, technically making the passage of food easier once the tongue propels food and fluid into it. On paper, it appears straight forward.

The following diagram sets out the procedure in a fairly sterile manner. It was provided to me by my surgeon yesterday. 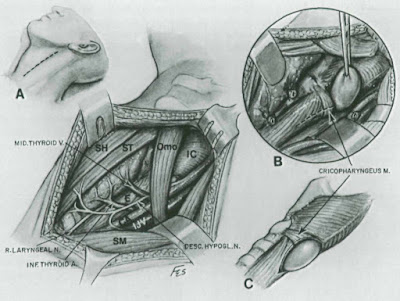 To access the structures of the neck, they'll create an incision down the left side of my neck, then retract the muscles, veins, arteries and nerves around my pharynx in order to reveal the cricopharyngeal muscle. During the procedure, they'll need to sacrifice an artery and vein that supply my thyroid gland, but these are considered redundant vessels as the thyroid gland is generously supplied by multiple vessels and is quite a vascular gland. The sacrificed vein and artery will be clipped with special titanium clips (so that'll be fancy). Once the cricopharyngeal ring and pharynx are identified, the surgeon will divide (or cut) the ring down to the pharyngeal wall and extend that incision down the pharynx about 5cm. The pharynx itself will then herniate through the incision (see Diagram C) which is the objective - to create a widening of pharynx that will allow food and fluid to pass freely into the oesophagus without the risk of the muscle going into spasm. The surgeon will close up and I'll have a stay in hospital to recover. Aside from a few technical additions to the procedure, that's basically it.

So, how am I feeling about this?

To be honest, I'm too numb to be frightened at the moment. After multiple procedures and attempts at solving this problem, it's like Groundhog Day to be back here again. I'm exhausted. I have been living day to day (and night) in a state of silent, anticipatory terror. Every time I sit down to a meal, I wonder whether this will be the meal that will cause my throat to seize completely and choke me to death. Every time I hold what little conversation I can hold, I wonder whether the mere act of speech will cause my throat to go into spasm and choke me to death. I said earlier I have come close a number of times. The most frightening occasions have occurred when I have been asleep. 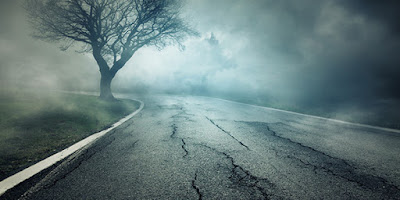 I am frightened at the prospect of this surgery and I know that fear will become more acute as I approach the day - May 4th by the way. There's an old maxim among Nurses that goes "A little bit of knowledge is dangerous." Having entered my 23rd year as a Nurse, the irony of that maxim is not lost on me. I know what's involved. I know the risks. This surgery is delicate. It's a blessing and curse.

I also know under the care of a brilliant surgeon and his team are among the best I have encountered - both as a Nurse and as a patient. I'll be in a facility of which I am familiar. There won't be a lot of strangers there. I trust them implicitly. So, there's a flip side that gives me a little to feel good about.

After two years, I feel like I'm in a no-win situation. I really need to have a win.

DFA.
Posted by DeanfromAustralia at 4:46 PM