Countering Resistance - A Look At Counteract by Tracy S. Lawson.

I'm always up for a compelling dystopian tale - especially one that is frighteningly possible. From the outrageous Mad Max series to the seminal cyberpunk classic Blade Runner to the oppressive The Handmaids Tale, visions of the future that play on our fears of what we see happening in the present a ripe for great storytelling. A series of books from Ohio native Tracy S. Lawson have really captured my attention this past month. Titled the Resistance series, this collection of four books follow a group of freedom fighters in a near future America that is straining under the yoke of a totalitarian regime who seek to control the population through fear and oppression.

Having completed the opening salvo in the series, "Counteract", I've moved onto book two, titled "Resist" and I am completely in thrall with Lawson's storytelling, characters and world building. For today, I'd like to showcase "Counteract" in the hopes it will whet your appetite for the series. 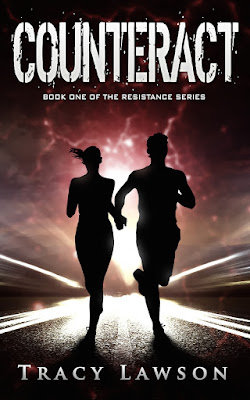 Two teens discover the government is staging terrorist attacks to exploit and control the public in Tracy Lawson's eerily believable YA debut novel.

In an alternate reality version of 2034, terrorist attacks on American soil continue after the events of 9/11. The Office of Civilian Safety and Defense, created in 2019 to oversee domestic security, rises to unprecedented heights of power by exploiting the people's overriding fear of terrorism.

When Tommy Bailey and Careen Catecher meet during one of the bogus terrorist attacks, they discover the OCSD's darkest secret: an antidote distributed by the government to "protect" people from the effects of imaginary toxins in the air is really being used to lull them into a state of submission.

Tommy and Careen face a difficult choice: stay quiet about what they know--or risk their safety and anonymity to join an underground rebel group that's determined to break the OCSD's grip on the nation.

Counteract explores the nature of power and the consequences and difficulties created when government attempts to control minute details of citizens' daily existence.

I found Counteract to be a taut, engaging & thrilling first entry in Lawson's Resistance series. Its alternative future setting remains anchored in our own real world so, visually, it wasn't a stretch to see it in my minds eye.

Our post 9/11 paranoia around terrorism has reached a fever pitch, and Lawson explores this and the lengths to which some will go to take advantage of a nations collective fear. Lawson's cast of characters led by the appealing, earnest and resourceful Careen and the enigmatic Tommy - a young man beset by tragedy that is intertwined in the politics of the time, Counteract moves at a crisp pace.

Its unfolding drama is rife with tension, great character moments and occasional levity that see saws effortlessly with the action. Lawson's writing style is at once accessible and she balances this with an intelligent plot and a fully realized future world that is scarily possible.

As a first entry, Counteract set me up for the subsequent entries and I'm eager to see where the series heads in Lawson's capable hands.

Once upon a time, Tracy Lawson was a little girl with a big imagination who was obsessed with telling stories. Her interests in dance, theatre, and other forms of make-believe led to a twenty-year career in the performing arts, where “work” meant she got to do things like tap dance and choreograph musicals. 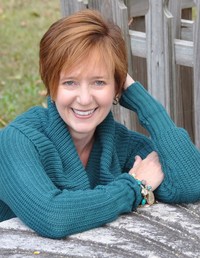 Her greatest adventures in musical theatre included creating disco choreography for forty middle schoolers on roller skates in Xanadu, building cast members’ endurance during an extremely aerobic jump rope number in Legally Blonde, and wrangling a cast of amazingly enthusiastic teenaged tap dancers in Crazy For You. She can also spin plates on sticks while she tap dances. Just ask her. She’ll be happy to demonstrate!

Though teaching dance and choreographing shows was a great outlet for her creativity and boundless energy, Tracy never lost her desire to write. Faced with her only child leaving for college and her husband’s simultaneous cross-country job relocation, it seemed she’d found the perfect time to switch her focus. But fear not—she has maintained her ties to educational theatre by returning to choreograph a few shows a year at Bexley City Schools in Columbus, Ohio, so she can continue to nurture students and share her passion for putting on a great show.

The Cincinnati native now has to her credit an award-winning nonfiction history book, Fips, Bots, Doggeries, and More: Explorations of Henry Rogers’ 1838 Journal of Travel from Southwestern Ohio to New York City (McDonald & Woodward, 2012), based on the writings of her great-great-great grandfather. Pride of the Valley, a companion volume to Fips, Bots, Doggeries, and More, followed in 2017.

With the release of Revolt on July 18, 2017, Tracy's award winning YA dystopian Resistance Series is now complete. Counteract, Resist, Ignite, and Revolt chronicle the adventures of Tommy and Careen, two teens who meet during a terrorist attack and discover a conspiracy that could destroy their country.

In her spare time, she blogs about YA and classic dystopian books and hosts Between the Covers with Tracy Lawson, an author interview program on the Liberty.Me network.

Tracy, who is married with one grown daughter and two spoiled cats, splits her time between Dallas, Texas and Columbus, Ohio.

DFA.
Posted by DeanfromAustralia at 7:11 AM