For Goblins Do The Bells Toll - A Look At The Goblins Of Bellwater by Molly Ringle.

The Goblins of Bellwater by Molly Ringle

Most people have no idea goblins live in the woods around the small town of Bellwater, Washington. But some are about to find out.

Skye, a young barista and artist, falls victim to a goblin curse in the forest one winter night, rendering her depressed and silenced, unable to speak of what happened. Her older sister, Livy, is at wit’s end trying to understand what’s wrong with her. Local mechanic Kit would know, but he doesn't talk of such things: he’s the human liaison for the goblin tribe, a job he keeps secret and never wanted, thrust on him by an ancient family contract.

Unaware of what’s happened to Skye, Kit starts dating Livy, trying to keep it casual to protect her from the attention of the goblins. Meanwhile, unbeknownst to Kit, Skye draws his cousin Grady into the spell through an enchanted kiss in the woods, dooming Grady and Skye both to become goblins and disappear from humankind forever.


It’s a midwinter night’s enchantment as Livy, the only one untainted by a spell, sets out to save them on a dangerous magical path of her own.

I had the opportunity to read an early version of The Goblins Of Bellwater by Molly and this forms the basis for my review.

The Goblins Of Bellwater, in many ways, marks a significant left turn for Molly Ringle after the rather epic Chrysomelia Stories. True to her talents as a story teller, and a nimble one at that, Molly Ringle returns with a one shot novel that, it could be argued, packs just as powerful a punch as her re-imagining of the Persephone mythology.

Taking inspiration from the works of Christina Rossetti and the visual genius of Brian Froud, The Goblins Of Bellwater offers a fantastical premise, complete with an ancient curse and a hidden population of goblins, which Molly injects seamlessly into a contemporary Pacific North West setting.

The balancing act from the very beginning of this story is perfect and, through the character of Skye - the victim of that curse - we are invested, experiencing her terror and helplessness as she endures it from behind a veil. Likewise, her sister Livy is a vividly drawn character, struggling to cope with something she interprets as something far removed from dark magic, but a something that is no less frightening. Into the mix, comes Kit, an unwilling witness to the machinations of the Goblins, while his cousin Grady, who falls for Skye in the midst of her ordeal, is unwittingly drawn into a conflict that threatens both his and Skye's very existence. Livy's trajectory in the story is, perhaps, the most compelling as it is she who has to find courage and the resources to confront this ages old curse as well as a tribe of beings who have only ever existed in imagination.

The Pacific Northwest, once again, leaps from the page in all its color and life and vibrancy, and I had no trouble immersing myself in a place that I can see is very special to Ringle. And, as she did with her Chrysomelia Stories, Ringle takes an established mythology and turns it on its head, resulting in fresh storytelling that crackles anew and surprises and delights.

The Goblins Of Bellwater is Molly Ringle at her fantastical finest.

The Goblins Of Bellwater hits bookshelves on October 1st 2017. 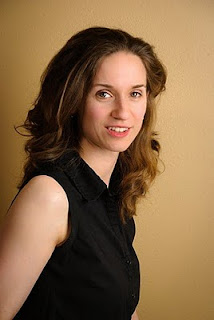 She has lived in the Pacific Northwest most of her life, aside from grad school in California and one work-abroad season in Edinburgh in the 1990s. (She's also really into the U.K., though has a love/stress relationship with travel.) She currently lives in Seattle with her husband, kids, guinea pigs, and a lot of moss.

View all my Goodreads reviews
Posted by DeanfromAustralia at 9:46 PM