The second Death Star is destroyed. The Emperor and his powerful enforcer, Darth Vader, are rumored to be dead. The Galactic Empire is in chaos.

Across the galaxy, some systems celebrate, while in others Imperial factions tighten their grip. Optimism and fear reign side by side.


And while the Rebel Alliance engages the fractured forces of the Empire, a lone Rebel scout uncovers a secret Imperial meeting…

I approached Chuck Wendig's Aftermath, the first post Return Of The Jedi title in the new Star Wars canon, trying to suspend as much expectation as I could. I was never a huge Expanded Universe geek. I did read some of the titles therein. Some were good but a lot were terrible so, I was one of those who treated the news of the relegation of the former Expanded Universe to Legends status with relief.

There has been a lot riding on this novel as a result. I was aware of the early reviews coming out about it and I was a little trepidatious but I chose to ignore anything Aftermath related until I could actually sit down and read it for myself. 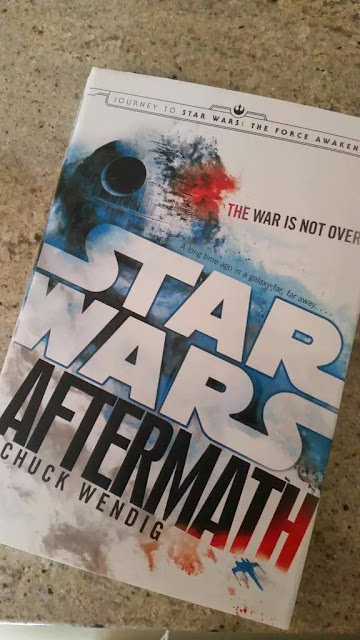 Nana Mayes bought me Aftermath for my birthday a couple weeks ago.

Having turned the final page over the weekend, I've gotta say, this is some of the best Star Wars fiction I have read in years. The story is unexpectedly original. It was suggested to me to go into the story with a keen eye on the machinations of the fractured Empire after their defeat at Endor and, that turned out to be one of the most fascinating threads in story. How the Imperial Remnant and their command structure try to regroup is explored with a keen eye on personality and those character traits that drive ambition and a lust for power in face of defeat and I really liked that. It was bold and Wendig pulls it off easily.

I was reminded of a 'what if' scenario I remember reading about a while back where the idea was posed -"what if the command structure of Adolf Hitler's Reich escaped Germany at the conclusion of WW2 and gathered in South America a'la Boys From Brazil to plan for a strike back?"

The absence of key Star Wars characters in Aftermath turns out to be not at all disappointing (although there are some exciting hints as to what the major players are upto via the Interludes that pepper the story). The focus for Aftermath is on a rebel pilot and freedom fighter Norra Wexley who returns to the planet Akiva in the hopes of reconciling with her estranged son Temmin.

This relationship and it's command over the narrative was one that I found powerful and involving. With the addition of a turncoat Imperial Officer and a dislocated Bounty Hunter, they become a ragtag team intent on repelling the Imperial Remnant from that planet. They are an attractive team, filled with nuance and contradiction and, for the first time in a long time, they are a cast worth investing in. I really came to like these protagonists.

Wendig's style is also something completely new for a Star Wars novel. It is told in the third person/present tense and what this does is it makes the story really immediate and easy to access visually. It achieves a cinematic quality, essential to Star Wars fiction, by dropping you right into the action in way that makes you feel you're embedded in it - like a documentary film maker. It works. It totally works and I look forward to seeing more of this style from Wendig in the two sequel novels that have been slated.

Possibly my most favorite aspect of Aftermath was the inclusion of a series of Interludes throughout the story. These Interludes break up the central story and provide a glimpse into events that are occurring all across the galaxy in the wake of the Alliance triumph at the Battle of Endor and they feature characters - both familiar and unfamiliar - who react to galactic events in interesting ways. Potentially, these could have been a distracting element but I found them informative and tantalizing. I saw these as clues, hinting at what is to come for the galaxy, The Alliance and The Imperial Remnant as we approach the cinematic release of The Force Awakens.

Star Wars: Aftermath is an important title in the Star Wars canon. It is also perhaps one of the most successful titles. Aside from its engaging story, its well rounded cast and satisfying settings, Aftermath is actually a thought provoking study in war and what happens at the conclusion of a major conflict. There are real world analogies throughout the book which one could readily look up and indeed, I spent a little time afterwards doing just that.

View all my reviews
Posted by DeanfromAustralia at 5:10 PM