The couple are vibrant. Early 30’s, professional. The Wife is dressed in a smart,  sexy business suit. A cup of coffee is in her hand as she rushes about, getting a few scraps of breakfast in before she goes off to work. The Infant sits in a high chair, spoon in hand fumbling with a bowl of cereal. Most of the cereal is on his face. The Man – his day off - still in his pyjama bottoms and navy Tee, quietly putting together a salad for his wife into a smart container.

The Wife gathers her handbag, cell phone, checks her lipstick. She kisses The Man on the cheek and hands him a piece of paper, a list of things to do. She kisses her infant son. Then she is off and out the door.

It is The Man and The Infant now - together.

The Man washes and dries the dishes, makes the bed and The Infant's cot, vacuums, puts a load of washing on. The Man and The Infant shower - splash, splash. Giggling and laughter, cuddles and kisses. The Man dresses - jeans, light shirt, a trendy jacket. The Infant -  a cute outfit. Bright, long sleeved tee, jeans, smart shoes and hat. The Man prepares the nappy bag, a lunch for The Infant, the stroller. Packs it all in the car - a smart European sedan. He straps the baby in, gathers the list and puts it in his pocket. Then they are off, The Man and son ready to embrace the day.

The Man, driving along, feels light and happy, singing along to the car stereo. The Infant is giggling with glee in his seat in back waving his arms about trying to imitate The Man.

The Man pulls into the child friendly parking bay. He is impressed. Lots of space here. Man gets out and opens the rear door. His son smiles broadly.

The voice comes from behind. The Man lurches up, hitting his head on the inside of the car door opening. He sees stars. Then he sees a angry woman. A mother and child - a daughter clutching a doll. The woman is waving her arms, pointing at him accusingly, then at the sign denoting the child friendly space. She swears, she spits.

“Who do you think you are?! This is not for you! You don’t belong here!”

The Man stares at her, shocked. His head throbs. The woman continues to berate him. The Man stands to one side revealing his son, sitting in the baby seat looking at her with a wide eyed smile. The woman falls silent. She hesitates, then abruptly marches off, her daughter trailing behind her.

The Man, shakes his head as he watches her go. He rubs the spot where he hit his head, then turns to The Infant with a pained smile. 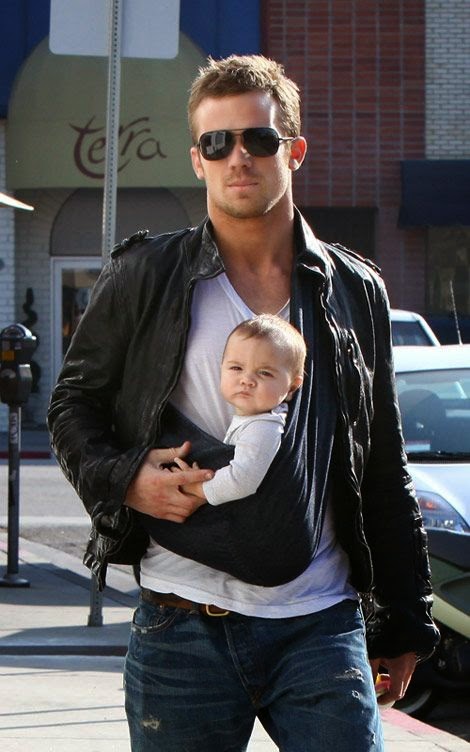 The Man negotiates the grocery aisle pushing the stroller with one hand, holding a basket in the other. He checks the items off the list. He feels better - feels good that this task is almost done. He scans the shelves for a particular item. He thinks of his wife. He loves her. His next culinary masterpiece lies in the ingredients he purchases here. He doesn’t want to let her down.

The Man turns abruptly, straining his neck. An obese couple is right behind him. The Husband - wearing a grubby woollen sweater, his hairy stomach bulging out from underneath his pants. The Wife – a sour face, too much make-up, sweating under arms. Both of them glare at The Man with contempt.

“What are you doing? Day dreaming?! You wanna move out of the bloody way?!”

The Husband butts his trolley into the backs of The Man’s ankles, grunting as if trying to push The Man aside. The Man quickly tries to move the stroller into the middle of the aisle, fumbling with the basket. The obese couple barge their way through. The Man up-ends the basket, it’s contents spilling everywhere, glass jars smashing on the tiled floor The couple don’t even stop but snicker as they glance back.

The Man tries to manoeuvre out of the way as more trolleys approach from either end of the aisle. A shop assistant approaches, an angry look on her face, armed with a mop and bucket.

Suddenly from beside The Man, the son plucks a jar of gherkins from the shelf, knocking two accompanying jars which smash to the floor. The shop assistant glares at The Man.

The son giggles with delight.

The son is crying, shifting uncomfortably in his seat. A smell rises. The Man screws up his nose but he smiles at his son. His neck still hurts, as does the lump on his head. The Man sees the sign for the bathroom.

Relieved, he angles the stroller towards the Men’s toilets.

The Man jumps and swings his head around, straining the other side of his neck. A curmudgeonly old janitor is there. He shakes his head. The Man hesitates, looks at the janitor quizzically. The janitor raises his hand and points a gnarled finger towards another door with a sign denoting the baby change room. The door opens and a woman emerges with a baby hanging from a harness. She regards The Man with disinterest. The Man angles the stroller towards the closing door as the woman brushes past him.

Inside, The Man is confronted by a group of women. Some sitting, breast feeding, some standing at the change tables, removing soiled nappies, replacing them with fresh, clean ones. They are chatting, laughing. They fall silent as The Man enters, struggling with the stroller and the fat shopping bags hanging from it. He offers a polite smile. The women turn away, whispering to each other.

Strangely, that affects him more than the fat couple from the grocery store or the mother in the car park. He finds a corner away from the others. He changes his sons nappy in silence. The women continue whispering. He can hear them. As he lifts his refreshed son from the change table and deposits him back into the stroller, The Man glances at the women. Their whispers stop and they look away.

The Man feels that twinge of embarrassment again and he hastily exits.

His son babbles cheerily as The Man pushes the stroller. Son looks up at his father with a loving smile. The Man looks down upon his son, managing only a wan smile in return.

Balancing a tray with a coffee and a sandwich, The Man searches for a place to sit down. The son is crying, hungry. There is a parents area with wide spaces between the tables. The Man heads towards there. He spies an empty table and he moves towards it. A trio of women armed with strollers of their own cut in front of him, disregarding him and secure the table for themselves. The Man just stares. One of the women stare back at him.

The Man turns away and finds another table on the edge of the parents area. Again he struggles. He sets the tray down, spilling some of his coffee onto the sandwich. The baby is screaming now. Mothers across from him glare. Some are breast feeding their babies. The Man looks at them blankly, sees their breasts. His eyes widen. They turn away in disgust. The Man turns back to his child. He feeds his son, settles him down. His son drops off to sleep. The Man turns to his coffee. He raises it to his lips. It is cold. He sets it down and turns to the sodden sandwich. There is a fly on it. The Man’s heart sinks.

The Man walks slowly. His son sleeps. The items on the list are checked off now - thankfully. He looks through the window of a toy store. Sees Lego sets on display. He remembers his childhood. He sees an electronic games shop. He played a lot of games before he was married. He is drawn into the store. The games have become more advanced. The Man examines the system requirements on the spine of one of the PC games. Way too advanced for me now, he thinks wistfully.

The Man spins around. Feels something pop in his left knee. A young, arrogant looking store assistant is coming towards him, pointing an accusing finger.

“Your kid is pissing on the merchandise!!”

The Man looks down. His son is awake and has, somehow, removed his jeans and his nappy. A thin stream of urine arcs perfectly across the space between the stroller and the display shelf splashing across a game title.

“You’re gonna have to pay for that!”

The store assistant rips the contaminated title off the shelf and shoves it into The Man's chest.

“What are you doing bringing a kid in here anyway?!? You don’t belong here!!”

The Man stares blankly at the young store assistant. His head drops. A lump rises in his throat.

The store assistant, suddenly appears uncomfortable. He backs away from The Man.

This guy is gonna cry, he thinks regretfully.

The Man fishes his wallet from out of his jeans, opens it up and takes out a hundred dollar note. He shoves it into the chest of the store assistant. The Man leaves the store in silence, his son chewing on the corner of the game’s cover.

The Man secures his son into the baby seat, packs the stroller away. The group of mothers from the baby change room are coming towards him, chatting and gossiping. They fall silent as they pass. He turns away, prepares to open the door of the car. He looks up and sees the mother who confronted him earlier. She is still dragging her daughter along like a rag doll, swearing at her to hurry up. She looks up at The Man and scowls. As The Man secures his seat belt and starts the car he looks through the windshield he spies the elderly janitor standing on the pavement nearby. He looks at the old timer, their eyes meet. The elderly man smiles - a smile of empathy, of understanding. He raises a gnarled, old hand, flips a jaunty salute and winks. The Man nods respectfully.

The Man drives home in silence. The car stereo is silent. The son babbles quietly to himself.

The Man unpacks the grocery items onto the kitchen bench. His wife arrives home. The son, who is sitting in his high chair, squeals with delight. She races to him, arms outstretched, wraps her baby in a enthusiastic embrace, smothering him in kisses. She turns to her husband, her Man and plants a loving kiss on his cheek. He smiles faintly, bows his head.

“I am so happy to see you both again,” she says.

The Man gazes wearily at his wife.

“You belong here,” she says to him. “You belong with me and our baby.”

She embraces her husband with a more passionate kiss then draws back.

“You look tired. Why don’t you go have a shower? I’ll take over for a while, I’ll pour us a glass of wine.”

The Man nods silently, then turns away slowly. She watches him go, a look of concern in her eyes.

He sits on the edge of the bed. He cups his hands together and rests them in his lap. The lump on his head throbs. His neck is sore. His knee clicks each time he moves it. He gazes through the window, through the street light beyond. A single tear forms at the edge of his right eye, it swells in size...

...Then trickles down his cheek.


Copyright © 2014, Hambledown Road Imprints & Dean Mayes. Not to be reproduced without the prior permission of the copyright holder.
Posted by DeanfromAustralia at 9:27 PM