“Shar ran. Just kept running, unaware of where her feet were taking her.
She kept shaking her head, trying to erase what she’d heard…she just couldn’t believe it. Memories started to spin in her mind, memories of Greg swinging on her swing when she came home from school.

Birthdays, Christmases, all lies. Every single day of her life was a lie. Deceit, every word he’d ever said. Tears blinded Shar as she ran deeper into the woods. She was numb to the pain of
branches pulling her hair, raking across bare her skin.

The pain from inside blocked everything out.”

from "Birth By Fire's Embrace" by Ashleigh Galvin (SPMG Ltd.)

Continuing my look at rising Australian authors this week, I'm pleased to introduce an exciting young scribe from Queensland - Ashleigh Galvin, whose debut novel "Birth By Fire's Embrace" from Spectacle Publishing Media Group launched across all the major etailers back on May 9th - with a print release scheduled for quarter 2 this year.

A rich mix of fantasy, action adventure that treads a line between our own modern world and a fantastical realm filled with classical archetypes, "Birth By Fire's Embrace" marks the first in an intended 8 book cycle from Ashleigh under the heading of the Amethyst Series. 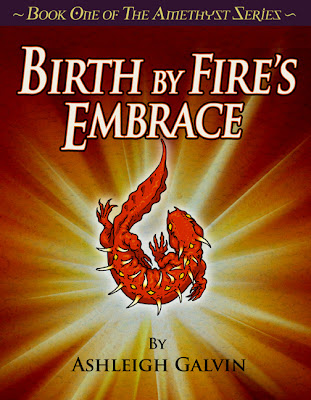 The guff on this first entry is thus;

A taut fantasy for all ages, Birth by Fire’s Embrace explores how drastically things can change when the world that lies just beyond our senses begins to surface. Sharrlette Moore is an ordinary young woman on the cusp of academic success, happy and satisfied in her relationship with the best guy in the world and looking forward to all that life has to offer. When all that is familiar vanishes from Sharrlette's life, she begins to look inside and find the strength and courage to carry on in a harsh world, and look towards another world that lies ahead.

The further away modern, popular literature moves from the Twilight series, it seems that the better and more original those literary offerings become. I've made no secret of the fact that I have struggled with the fantasy genre in the past, simply because there has been so much of it and not all of it has been very good. Where the genre does work, however, is in those stories where the author has clearly stepped out of the genre's comfort zone by offering an original element that immediately piques curiosity and promises an tantalizing alternate take.

And Birth By Fire's Embrace is no exception, proving that there is life in the fantasy genre yet. Ashleigh Galvin brings to the table a dense and nuanced world which she juxtaposes skilfully with a modern real world setting. This kind of world creation, to me, is an appealing and important aspect of this kind of writing. It takes a kind of artistic flair to pull it off well. Galvin's balancing act between the real and the other worldly are visually accessible, keeping you invested in the environments and situations.

Galvin's characters, lead by the fully realized heroine in Sharrlette rise from the page vividly and with an attention to their individual details that make them convincing. I especially found Sharrlette's arc engrossing. She represents the "every person" really well, allowing us as the reader to access the story through her eyes in such a way that we feel her reactions to what is taking place. Again, because Sharrlette is grounded in our own real world to begin with, this device makes for a much more compelling story.

As a work whose design is to set up a series, this first entry succeeds really well in introducing us to the universe Galvin has created and she has achieved the two important functions such a entry has to satisfy. It offers a contained story that sits on it's own while offering enough tangible threads that will entice the reader to invest in further instalments the eventual series.

Ashleigh Galvin has written an exciting tale that refreshes the genre and offers an accessible journey with classic elements worthy of exploration and contemplation. Having had the opportunity to take an early glimpse of the novel, one of the things that impressed me about it was the relative youth of Ashleigh herself. She writes in a voice that, to me, seemed so worldly and -  *ahem* - mature, that I knew that I wanted to delve a little further into the voice behind this accomplished work.

I started by asking Ashleigh a little about her herself and where she's at now. Ashleigh has an impressive resume to her credit both in business and modelling, while she also dabbles in digital art.

A.G. - I live with my fiancée, Michael in a little unit in Brisbane, Australia. While I’d love to be a full time writer, eventually, I currently work at HBM Lawyers as an IT/Admin Assistant. I've been working there for roughly 3 years.  I've been doing Modelling on the side for roughly 4 years. It’s great fun. Particularly the themed shoots. It lets you step away from reality for a little while. I also draw in my free time. Mostly digitally now days. I normally draw Manga style characters. It’s great fun and, if being an author doesn't work out, I’d like to be an illustrator. But I have a lot more practise ahead of me before that. 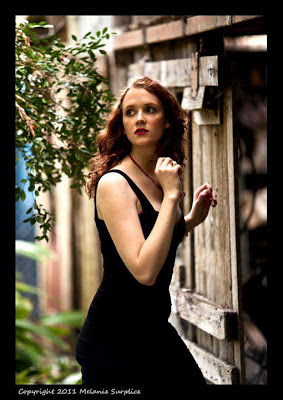 DFA - As an author, you've made an impressive splash into that pool. Where did your journey as an author begin and how did it progress?

A.G. - I started writing when I was still in primary school. I was going to write ‘the best novel ever’. It was called ‘The Scar of Athens’ and, needless to say, when I read it now, it’s extremely boring and lacks structure. But it inspired me to continue writing and refining my skills.

DFA - I was really taken by the visual quality of your writing. Where does the inspiration for your vivid story telling come from?

A.G. - My usual reply is daydreaming - (laughs here) - I daydream a lot! I like to call them epic daydreams because I can have one daydream that will last a week or longer. Whenever my mind is idle, I just pick up where the story left off. I get most of my novel ideas this way.

DFA - You've created a compelling set of characters for the novel. How do you arrive at your characters and what elements do you infuse into them?

A.G. - I don’t actually base most of my characters on people I know. I don’t like to do that because I feel it can make the characters too predictable. I create most of my character from the ground up. Sharrlette is probably the exception. She was based mostly on myself, with a dash of my sister thrown in. My fiancée Michael also provides a lot of inspiration and ideals. He is a Games Designer so we are both very creative.

DFA - It's clear that the work which has gone into your debut novel has been considerable. With the release of Birth By Fire's Embrace, how do you feel about the achievement and what are your hopes for the future?

A.G. - I'm very proud that I've actually written a book worth publishing. I know very few people get published at my age so I'm happy about that too. I'm very happy with the universe I've created for this series. It’s a great place that I can set many different stories in. It’s just bursting with potential.

As Ashleigh Galvin works towards more stories in the series, expect the Amethyst Series to attract a lot of attention. Her skill as a story teller is considerable and her relative youth affords her a particular edge in the production of future stories that crackle with everything that is great about talented indie authors.

Purchase "Birth By Fire's Embrace" here (Amazon) and here (B and N).

The Regenesis Cluster - the stunning new novella from Dean Mayes - out now.

Posted by DeanfromAustralia at 7:41 AM