I'm not in the habit of reviewing books. In fact I'm not really sure what the protocol is for reviewing books. Does one have to be terminally cynical and completely wedded to the technical aspects of a story? Should one offer up a critique of the story based upon plot, characterization and mood? I dunno.

I have just finished up the following book that I'm going to talk about. I felt that it was right to say a few words about - because it was so damned good! So, as a reader (as much as I am a writer) I'm going to have a go at giving you a review and we'll see if it - my reviewing - is any good.

Lily (The Quest For Reason) by fellow ireadiwrite author LM DeWalt is an intoxicating read. From the synopsis we find that Lily is a lonely vampire desperate for love and a normal existence. When she finally finds someone she can love and a group of vampires she can call family, her long lost maker comes back to claim her. To save the ones she loves, Lily must face, and possibly destroy, the one who stole her choices and her very life. 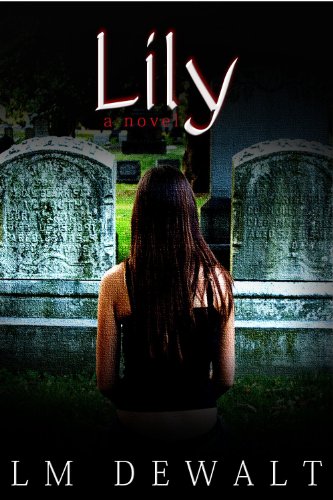 I came to Lily intrigued by the synopsis of Lily as a solitary figure but colored somewhat by my "is this going to be similar to 'a certain vampire franchise'?" I've enjoyed reading within the genre in the past - have been a fan of Anne Rice, I admit to watching & enjoying "Buffy" and "Angel" and I thought that "The Lost Boys" was a kick arse piece of cinema back in the day. I am - and I apologize in advance for this - less enamored with the whole "Twilight" franchise.

What I discovered in Lily, however was a completely unique interpretation of a vampire with a 'heart'...so to speak. And I was totally tuned into Lily's inner "voice" - this was one of the things I liked most about the book. I commented whilst reading Lily that I was totally taken with Lily's internal conflict borne of vulnerability. I was moved by her loneliness and her desire to connect with others and was suitably disturbed by the animal nature of what she is - a vampire.

LM DeWalt, Author of "Lily - The Quest For Reason"

LM DeWalt has crafted a wonderfully rich tableaux in the journey of Lily which is really quite stunning. Her settings were vivid, the conversations convincing and 'real' and the love story at the core of Lily is bewitching which, like the previous reviewer said - will have you on your feet cheering for this wonderful soul.

LM DeWalt is a Peruvian American who has been living in the US for 30 years. She works as a teacher of ESL, Spanish, French, and accent reduction and is also an interpreter and translator and runs creative writing groups. She is currently attending teacher's college. She has written for several Spanish language newspapers but her dream was always to write novels. Her love of vampires started when she was seven years old and saw Bella Lugosi's Dracula.

She currently resides in Northeastern Pennsylvania, where it's way too cold, with her husband, three teenage sons and two cats.

Lily is written with such care that it is easy to see that this was a story very close to LM DeWalt's heart. I am additionally blown away by the fact that Lily is available not only in English but also in Spanish.

Cover art for the Spanish version.

DFA.
Posted by DeanfromAustralia at 8:38 PM