Aboriginal and Torres Strait Islanders are advised to use caution viewing this article, as it may contain images or descriptions of deceased persons.

It's a satchel kind of journal which opens like a wallet and has a strap that you wrap around the cover to secure it between use. It's a beautiful thing, it has a gorgeous smell and the paper inside is just so luxurious to write on. The paper itself is lined but it's embossed rather than lined in the traditional way, which adds a layer of hob-nobbiness to it that I just love. I only ever use a lead pencil with it. I cannot bare the thought of soiling the pages with ink from a ball point. That, to me, seems so wrong. Whenever I use it, I only use a Derwent artist's pencil from a set of gray lead pencils I own that I bought years ago. And I allow no-one - absolutely no-one to write in it other than me...

Is that a little screwy?

I began using it when I was half way through writing The Hambledown Dream. Prior to receiving it, I was making notes in a much smaller Moleskine notebook which I handled in much the same way. I wished I had made more notes in it about Hambledown but whatchyagonnado? It would have been nice but there's enough in there to remind me of the journey I undertook in writing Hambledown. I'm a sucker for reminiscing. 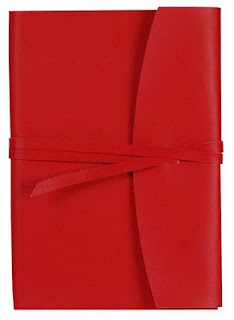 In the past week I have filled about a dozen pages with copious (already) notes and scribblings, ideas and character sketches for Project Ruby. And I am encouraged by the picture that is beginning to emerge. Already I have mapped out a significant portion of the eventual story and I have given life to several core characters that I intend to go forward with. I have accompanied that with a healthy amount of research into material that I hope to use to add body to the story. Already I have amassed some good material on the violin and it's history - which I feel is important for me to know so that I can talk about it in the story with some measure of authenticity. 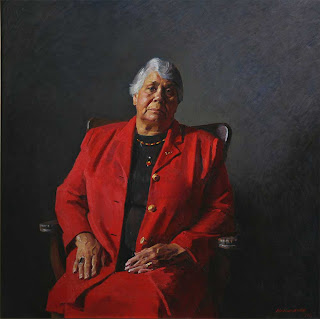 Australian of the Year (1990) Professor Lowitja O'Donoghue. I have drawn inspiration for the character of Ginnie from this remarkable woman.

The Stolen Generations which will have a part to play in the history of one particular character who I have named Ginnie (short for Virginia). She is a grandmother, an Aboriginal woman with a tragic past and a life of struggle which she has largely kept from her grandchildren. Ruby - the central character in this story is the eleven year old grandchild of Ginnie - an undiscovered virtuoso whose natural gift with the violin will drive the story. She won't be named Ruby in the final product - the reason being is that Ruby is the name of a famous Aboriginal Australian named Ruby Hunter who died very recently. 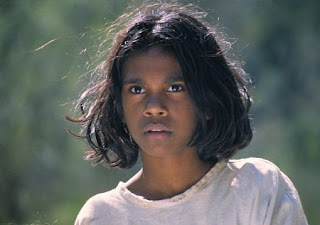 Australian actress, Everlyn Sampi as she appears in "Rabbit Proof Fence" This is my Ruby.

There is a cultural practice amongst Aboriginal Australians that the name of a recently deceased figure should not be mentioned in the presence of others - hence the warning at the beginning of this post. I actually like the name in and of itself but even I - as an outsider - don't feel comfortable in retaining it for that very cultural reason. I am finding out a lot about the deeper workings of the Aboriginal culture as it pertains to things like this. It's invaluable if only it directs me towards a more truthful representation of the people in the story.

I have also given life to another character - a cousin who lives with Ruby and her grandmother Ginnie. His name is Jeremy - a fifteen year old who leads a troubled life, colored by petty crime and a struggle with his own identity. He walks a destructive path but his brotherly love for Ruby may well be his saving grace.

I've chosen to set the novel in Adelaide, Australia - where I live. Adelaide presents a couple of advantages for me in that it has a vibrant arts and music culture in which I will be able to place a number of crucial scenes and settings and being that it's town where I live, being able to give a more detailed narrative about the places and people in which my characters interact will give a deeper sense of authenticity to the story I hope to write.


My checklist of things to do in the next little while is to visit the Elder Conservatory of Music here in Adelaide to get a feel for this particular location as it has a significant role to play in the story. I also want to take a train journey from a northern suburbs train station to the Adelaide Central Railway Station. Ruby travels to the City on a suburban train on her clandestine trips to listen to a String Quartet practice - this point is significant in the development of how Ruby's gift is discovered. Although I don't intend doing this myself, I need to know how someone would successfully evade a train fare in order to travel from Adelaide's northern suburbs to the metro station. Given that Ruby's poverty prevents her from being able to purchase a ticket for the train, she resorts to fare evasion in order to be able to listen and practice in the shadows of the austere grounds of the Conservatory.


This checklist will grow as I get further into the development of the story no doubt. And my red leather bound journal will swell with pieces of paper, photocopies and printouts and reams of scribbled notes jotted down with a well worn HB pencil.


DFA.
Posted by DeanfromAustralia at 9:06 AM