All The Better Part Of Me - A New Release from Molly Ringle.

There's always cause for celebration whenever Central Avenue Publishing launches a new novel from Seattle based author Molly Ringle. This is especially true for Molly's latest offering "All The Better Part Of Me" that is due to hit stands on September 3. I had the opportunity to participate as a beta reader on an early draft of this outstanding new novel and I'm so pleased to see it come to life in its final form. 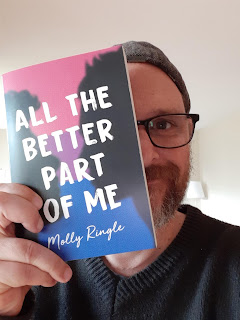 What's it all about?

It's an inconvenient time for Sinter Blackwell to realize he's bisexual. He's a 25-year-old American actor working in London, living far away from his disapproving parents in the Pacific Northwest, and enjoying a flirtation with his director Fiona. But he can't deny that his favorite parts of each day are the messages from his gay best friend Andy in Seattle—whom Sinter once kissed when they were 15. Finally he decides to return to America to visit Andy and discover what's between them, if anything. He isn't seeking love, and definitely doesn't want drama. But both love and drama seem determined to find him. Family complications soon force him into the most consequential decisions of his life, threatening all his most important relationships: with Andy, Fiona, his parents, and everyone else who's counting on him. Choosing the right role to play has never been harder. 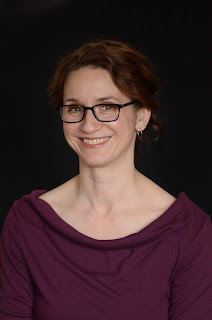 Who is Molly Ringle?

Molly Ringle was one of the quiet, weird kids in school, and is now one of the quiet, weird writers of the world. She likes thinking up innovative romantic obstacles and mixing them with topics like Greek mythology, ghost stories, fairy tales, or regular-world scandalous gossip. With her intense devotion to humor, she was proud to win the grand prize in the 2010 Bulwer-Lytton Fiction Contest with one (intentionally) terrible sentence. She's into mild rainy climates, gardens, '80s new wave music, chocolate, tea, and perfume (or really anything that smells good). She has lived in the Pacific Northwest most of her life, aside from grad school in California and one work-abroad season in Edinburgh in the 1990s. (She's also really into the U.K., though has a love/stress relationship with travel.) She currently lives in Seattle with her husband, kids, corgi, guinea pigs, and a lot of moss.

Stylistically, this new novel is signature Molly Ringle, from its smart dialogue to its grounded and recognizable characters and its rich and evocative Pacific North West setting - honestly, why Molly has never been tapped to write for a Gilmore Girls-esque TV series is beyond me. Where "All The Better Part Of Me" represents a departure for Ringle is in its handling of a Male to Male relationship - one that is sensitive, deep and enriching, both for the story and for the reader.

During my beta read, Molly and I had a back and forth during which we remarked on how similar the experience of writing outside our familiar cultural sand box was for us both. I recall Molly fretting at times about whether she was unfairly appropriating a narrative in portraying a gay relationship from a heterosexual perspective - in much the same way as I worried about writing an Aboriginal story from a non Aboriginal perspective with "Gifts of the Peramangk".

Molly's approach to the central relationship between Sinter and Andy has been handled with such a deft hand that you soon lose yourself in their love story, forgetting any baggage that may or may not come with the genre. As I have often said of Molly Ringle - she is an astute observer of the human condition and, as a storyteller, she is able to tap into something universal, no matter what genre she is writing within. All The Better Part Of Me brings together everything that makes Molly Ringle's writing so appealing and then goes further, exploring love and family and the politics of love and family in a smart, engrossing tome that will leave you heartily satisfied.

Where Molly Ringle Can Be Found: