To help establish the mood of my upcoming novel "The Artisan Heart", I'm pleased to share the official Spotify soundtrack playlist for the novel with you.

Over the past little while, I have been curating a selection of music that inspired me while I was writing the novel and I've put together a soundtrack. Featuring the music of Swear and Shake, Josh Pyke, Paul Kelly, Greta Bradman, Stereophonics, Cold Chisel and many more, this soundtrack playlist will take you on a musical journey through the story and give you an aural experience that I hope you'll enjoy.

Just click on the image below to open the playlist in your Spotify app. 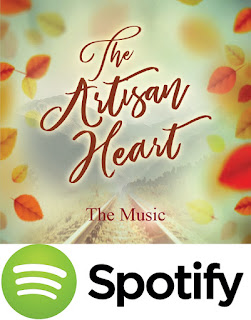 
Hayden Luschcombe is a brilliant paediatrician living in Adelaide with his wife, Bernadette, an ambitious event planner. His life consists of soul-wrenching days at the hospital and tedious evenings attending the lavish parties organized by Bernadette.

Isabelle Sampi is a struggling artisan baker raising her hearing-impaired daughter, and has no time for matters of the heart. Yet the presence of the handsome doctor challenges her resolve. Likewise, Hayden, protective of his fractured heart, finds something in Isabelle that awakens dormant feelings of his own.

THE ARTISAN HEART IS AVAILABLE FOR PRE-ORDER!


Posted by DeanfromAustralia at 11:57 PM