Bastards I Have Met - A Look At The Doghouse Bastards Radio Show.

In the ever evolving landscape that is internet media, there has been all sorts of programs - both audio and visual - which have come along and staked their claim to a patch of the huge real estate offered by this modern form of media. In the broadcast audio medium alone, there is, quite literally, a dizzying choice for the discerning audio listener to choose from and one can easily find something to suit their individual tastes. 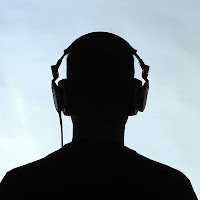 I, myself, tend to gravitate towards comedy, satire and dare one say it - gallows humour.  Though gallows humour, by definition, refers to grim and ironic humour found in desperate or hopeless situations, I tend to look upon it more broadly as a more conversational and observational humour that flirts with a line and invariably crosses over it.

Ricky Gervais is one such example of a wildly successful podcast that mixes humour and satire together brilliantly in a deliciously offensive - depending on your perspective - and thus hilarious brand of internet radio. Stephen Fry has commanded a similar, large following through his more genteel brand of comedy. Regular visitors to my site will know of my avowed devotion to the New York podcast Keith and The Girl where, their similar free reign to talk about any and all subject matter means they can get away with blue murder (figuratively speaking of course) and thus produce a unique brand of comedy, so blisteringly funny that I routinely find myself in tears of laughter.

Today, I wish to shine the spotlight on another internet radio show which has quickly and affectionately risen to the top of my weekly audio listening roster and now stands as thee source for the inappropriate humour I crave.

Back in 2011, quite unassumingly, a couple of guys got together in the Scottish city of Aberdeen to lay down the first audio of what was to become The Doghouse Bastards Radio Show. Hosted by long-time door steward Scott 'The Sasquatch' Taylor, and co-hosted by the curiously named Peter "Mr Pink" Pink and Steev "Thunderc*ck" Early, the DHB - as it has become affectionately known - presented itself as a mish-mash of political in-correctness and conversational humour that examines sex, relationships, work, play and life from a kind of intelligent, working man's point of view. 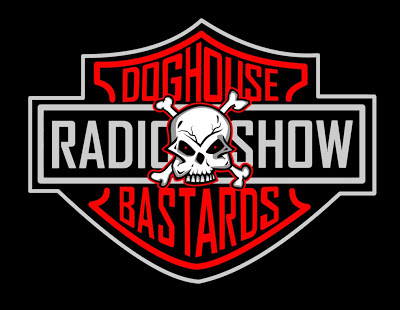 I became aware of the show through my friendship with Taylor himself, although he didn't immediately reveal to me what he was up to at that time. I think he was a little hesitant of revealing to much of the show's existence initially because he was unsure whether it was going to work or not.

Suffice to say, The Doghouse Bastards Radio Show, has become somewhat of an internet sensation, rising to the top of the iTunes comedy podcast charts and routinely logging downloads in the thousands.

For all its outward crassness and "blokey" bravado, it's not hard to examine why the show works

The feel of the DHB Radio Show reminds me very much of the kind of conversation I used to observe among the working men who would congregate at the Pub after a long day at work - particularly those men who worked in the coal fired power stations where I grew up in country Victoria, Australia. To point out a more local example (in terms of the show's origins in Northern Scotland) it's a similar kind of humour that was characteristic of the dockworkers of the Glasgow shipyards which gave rise to the likes of Billy Connolly. Among these hard men, some of the rawest observational humour could be found. It was uncompromising, often inappropriate but at the same time it was wickedly intelligent and required a quick mind to appreciate the thrust of the comedy to be found within, Moreover, it was affectionate with a generous slab of self deprecation...

...which thus made it fucking funny.

Helmed confidently and with Billy Connolly-esque comedic timing is Scott Taylor, a career door steward and security specialist, who conceived and produced the show and has almost single handedly converted a room in his house into a professional grade studio that is the nerve centre of the show itself. Taylor is also a talented writer, having contributed to a publication a few years ago titled "Bouncers and Bodyguards - Tales From A Twilight World" that chronicles numerous accounts from career security personnel, nightclub doorman and bodyguards and was something of a sleeper hit when it was released, becoming a best seller around the globe. 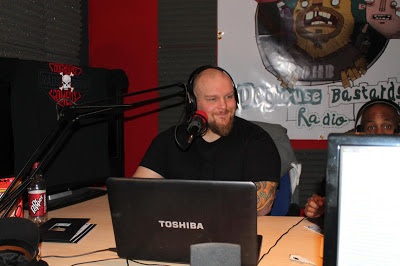 Along with Scott Taylor is his acerbic and world weary co-host Peter "Mr Pink" who presents 'via satellite' from his remote studio in the north coast Scottish town of Thurso. An in-joke that has become the hallmark of the DHB is the fact that Peter Pink appears weekly, via video, wearing a pink balaclava and sun glasses and thus the audience who tunes in via the live video stream aren't privy to his true identity. This allows Pink the relative freedom of unleashing his own expletive ridden brand of comedy that is lightning quick and razor sharp. 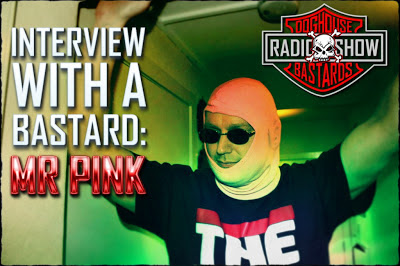 Steev "Thunderc*ck" Early can best be described as the gentleman of the DHB in-studio team - a man who offers affectionately wry observations about life that often come out of left field and routinely reduce the team and listening audience to fits of laughter. Similarly, his somewhat pathetic grasp of anything pop culture pre-1985, is a priceless source of comedy that is mined relentlessly on the show. Steev's appearances on air are broken up by long stints away with his work - but his returns are invariably fodder for stories with a comedic bent. 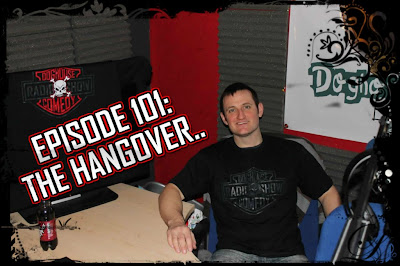 Rounding out the team is a Richie Maynard who Scott routinely describes as the "Monday Night Highlight" or the "Money Maker Maynard". He swaggers into the studio weekly with a voice that is caramel smooth and plays in beautiful contrast to the kinetic energy of Scott and the biting satire of Mr Pink. I like to describe him as the Billy Dee Williams of the DHB Radio Show - Women want to be with him, while men want to be like him. In a similar fashion to Steev, Maynard delivers a nuanced comedic contribution to the on air team that hums with an electric energy and routinely guarantees laughs. 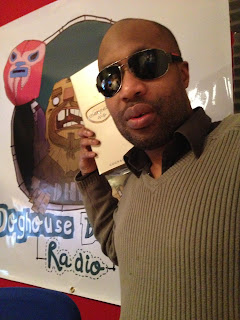 Regular contributors to the show include Claire "The Fairy Bastardess" Cooper who is a fire cracker of a woman, an uncompromising lass with a potty mouth but a heart of gold, Jo "Jaybles" Banlana and Tracy "The Flaps" Neilly, both of whom have the most unassuming natures, almost incompatible with the kind of wrecking ball humour the DHB serve up and yet both girls can match wits the boys and routinely surpass them, leaving them speechless.

The team as a whole have a chemistry that is undeniable. It is clear, listening diligently as I have for the past two years, that all of them enjoy what they do immensely, thus the quality of the show - both from a technical stand point and a comedic flavour - works effortlessly. 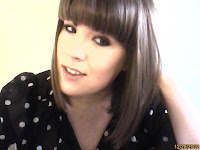 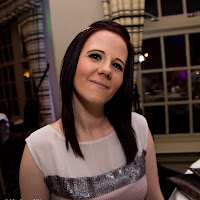 I have remarked privately to Scott Taylor himself that, working in the high stress job that I do, I like to blow off steam in such a way that I can remain sane therefore I connect very much with the spirit of that working man's humour that the DHB offers up on the good dinner ware week after week. This is a phenomenon I have observed from many who work in similar industries - from medical, to emergency services, law enforcement and the military - and there is a potent validity to the psychological benefits of the occasional indulgence in inappropriate humour. Indeed, I know of serving military personnel in both Afghanistan and Iraq, who download the show as soon as a fresh episode hits.

The genius of the DHB lies in its ability to "take the piss" out of the hyper serious nature of society and modern culture - especially pop culture - where too much value is placed on celebrity and too much stock is invested in political correctness.

As a social document, The Doghouse Bastards Radio Show has supreme value because it allows us the pleasure of being able to laugh at ourselves and it encourages us to not take life so seriously.

Connect with the DHB here.

DFA.
Posted by DeanfromAustralia at 5:00 PM