My good friend and fellow ireadiwrite Publishing alum, John Rasor has announced that his very-tongue-in-cheek retrospective of the TV series phenomenon Lost - How Lost Got Lost - has finally made it's long awaited leap to the printed page.

I covered John's book back in July in the lead-up to it's digital release and I am so pleased that "How Lost Got Lost" is now available in print.

I wrote then that John first came to notice with his debut novel  "Roadkill", a deliciously sinister tome of a serial killer with a severe case of road rage who patrols the streets of L.A. and the highways of Southern California running down drivers who are using their cell phones while driving. His rage extends from the tragic death of his wife and unborn child in a similar but unrelated incident. "Roadkill" had me thinking of Denzel Washington's "Man On Fire" and more recently, the Liam Neeson actioner "Taken" in which an insatiable desire for revenge feeds the protagonist. I have to confess that I have a predilection for these types of stories.

In the aftermath of what many regard as the greatest "What the Fuck??" ending of a major television series ever, John has sat down, driven by the need to understand, and has penned what could be the definitive tonic to aid all those Lost fans who are still picking themselves up off of the floor. "How Lost Got Lost" is one Lost fan's labor of love, a soliloquy of pent up frustration laid bare. John Rasor examines the Lost phenomenon in a blisteringly funny narrative that is choc full of valuable insights and measured consideration that seeks to answer that one burning question - W.T.F?

John writes with an unbridled enthusiasm and a genuine love for the series. Though I haven't been a huge devotee of the series Lost, John's ability to speak to the lay person is such that you probably didn't need to be a fan. Since I have come to know John, I have been particularly impressed with his almost encyclopedic knowledge of episodic television and his zest for pop culture which transcends almost all barriers.

Check out John's site where you will find all the necessary links to purchase, what I regard as a landmark publication. John's site is fast becoming a totally engrossing repository of everything great about pop culture vultures. I also encourage you to check out John's interview with Jason of the Brink of Sanity Show where he discusses the book in depth as well as other adventures in TV culture.

John is a great orator and someone who I like a lot. 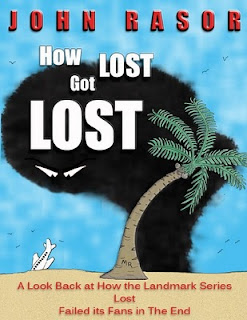 Posted by DeanfromAustralia at 10:19 PM