I have made this one observation of myself in the past that I am a person who finds it difficult to calm my mind. It is always working, always processing things and I have experienced many a restless night because of it.


One of the things that really gets my cogs ticking over is an almost obsessive interest in the trivia of people. Like - I like to often drop the useless bit of trivia that Fletcher Christian - that infamous Bounty mutineer from long, long ago had syphilis. Why I know that, I don't know but I know it none-the-less. Also, I am the guy that stays behind in his seat in the cinema, after the movie has finished because I like to watch the credits to spot who the cinematographer on a particular picture was or who the girl in the back ground was in a particular scene because I know - I JUST KNOW - that I have seen her in some other film in an equally obscure background scene.


And so it happens that I know just about every backing vocalist who has ever paired up with British rock icons Pink Floyd since the early 1970's. This particular piece of useless information is especially that...useless but I can't help myself.


And of all the backing vocalists who have ever graced the stage with this most favored bands of mine, one - in particular - has intrigued me to the point of being a little too screwy.


I speak of course of Rachel Fury.


I first sat up and took notice of the singer Rachel Fury as a 14/15 year old back in 1989 when my father came home from the video store armed with a VHS version of the world beating 'Delicate Sound Of Thunder' concert, complete with the girls wearing those totally HOT figure hugging dresses and the long gloves that were seriously sexy. From the moment I saw her, I was completely besotted by Rachel Fury and I have watched that concert over and over again in the proceeding years - countless times - just to indulge in the vision of her performance. I thought her contribution to "Great Gig In The Sky" and her duet with David Gilmour on "Comfortably Numb" were sublimely hypnotic and there was some footage of her during their performance of the song "Momentary Lapse Of Reason" that hooked me every time. I have to profess an unhealthy kind of love for this woman. 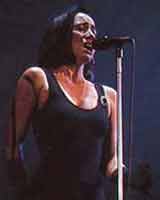 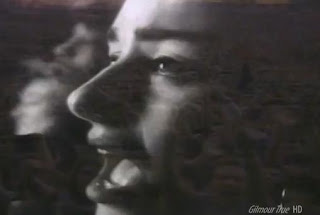 
Why it was then, that I sort of forgot about her for 18 odd years after-wards is something only the universe can explain. I grew up, stepped out of my adolescent brain and became a cynical prick I guess. But my love for Pink Floyd has never waned over the years even though it has perhaps become somewhat dormant from time to time.


A few short weeks ago, going through my impressive music collection here at home, I fished out David Gilmour's superb third solo album "On An Island". I was in the mood for the atmospherics of that album and I was - of course - not at all disappointed. Here you go - here's another piece of useless triva - David Crosby and Graham Nash performed backing vocals on that very album. Listening to the sounds of Gilmour and Wright, Carin and Pratt - and Crosby and Nash's contributions - something was suddenly touched off in my mind, an almost long forgotten memory of that beautiful woman from so long ago.

For years I had (erroneously) deduced that her name was in fact Margaret Taylor. It seemed to fit with her - she looked like a Margaret to me. But once I jumped on the interweb a few weeks ago and began searching I around, I quickly realized that I was wrong. The information on her is sparse as to be almost non existent. But after a few hours of clicking around on Google and other search engines this is what I came up with...


Rachel Fury is (or was) a session singer who first appeared on the radar in the very early 1980's. The only evidence of this comes by way of a MySpace image (below) for the profile of British guitarist Alan St.Clair who was a noted musician in the punk and new wave movements at that time. One might surmise that Rachel Fury toured regularly with St.Clair and his colleague Howard Devoto (of Buzzcocks and Magazine fame) but this would need to be confirmed. 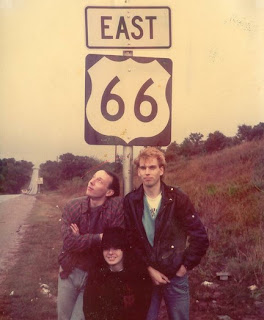 The next significant snippet of information comes from some information on the noted music producer, James Guthrie, who it appears, introduced Rachel Fury to Pink Floyd in or around the mid 1980's. She and Guthrie were in a relationship at the time. Fury's talent as a session singer must have impressed the band members significantly because she is credited as a singer on the reimagined Pink Floyd's 1987 album "Momentary Lapse Of Reason" and was contracted to tour with the band for the world beating "Delicate Sound Of Thunder" tour between 1987 and 1989.

From what I have read on various message boards, there is some suggestion that there may have been some sort of romantic "thing" between David Gilmour and Rachel Fury during the 87-89 tour. Various message board lurkers refer to concert footage suggesting an "innate" chemistry between the two on stage. I read this as drawing a very long bow and I prefer to think that it is more a case of there just being a good vibe between all the members of the mid 80's Pink Floyd line-up.


Video of Comfortably Numb from the "Delicate Sound Of Thunder" tour circa 1988.


It is after the successful DSOT tour that Rachel Fury all but drops of the precipice into a swirling black hole of ... well ... nothing. The only singer from that trio from the DSOT tour to continue with Pink Floyd is the equally fabulous and still prolific Durga McBroom (who is credited on "The Division Bell" album and appears in the "P*U*L*S*E" tour line-up. As a side note and yet another example of my love of trivia, Margaret Taylor - the third singer from the DSOT tour - is also still active in the music industry, though today she goes under the name Machan Taylor.


The last snippet of any significance that I can find is a mention that by 1995, Rachel Fury had given up singing altogether and had become involved in the animal rights movement.


But this is not the last thing.


Drilling a little deeper, I have unearthed an additional snippet that confirms something I wondered about for a long time - that Rachel Fury was not actually her real name. Over this past weekend, I have some evidence that confirms this. Again, from some other message board sources I have found that her name is (or was)  actually Rachel Brannock. There is a Facebook page titled "All Things Brannock" - evidently a page dedicated to the Brannock family. Clearly visible on the Left hand sidebar of the page under pictures, a picture of the very Rachel (Fury) Brannock that has stuck like a claw in my thoughts these past fews weeks. Rachel Fury, her enigma is both powerful and lovely...


Who knows if this is all true or not. But I would like to think that there is still some hope that Rachel might surface one day. Perhaps she is living on ... I dunno ... Guernsey perhaps? Happily married with a couple of kids, still looking pretty damned hot and running a successful vet practice ... perhaps. One morning she opens her laptop while sipping her coffee and indulges in that little thing that I'm sure we've all done in the recent past and Googled herself. She might see this and decide to respond? Either that or she's dead, a hippie who renounces all forms of modern technology or she's just not that into all this worship...


I take heart in the knowledge that I am not alone in wondering just what happened to this lovely lady Rachel Fury/Brannock. All over the internet, people just as (crack potted) dedicated as me are posing the same question. Where did she go? Does she still sing? Is she actually alive??

Posted by DeanfromAustralia at 8:20 AM